Serbia has "sound ground for sustainable and dynamic growth"

Serbia is "much different nowadays than it was four years ago and has sound grounds for a sustainable and dynamic economic growth," Ana Brnabic has said. 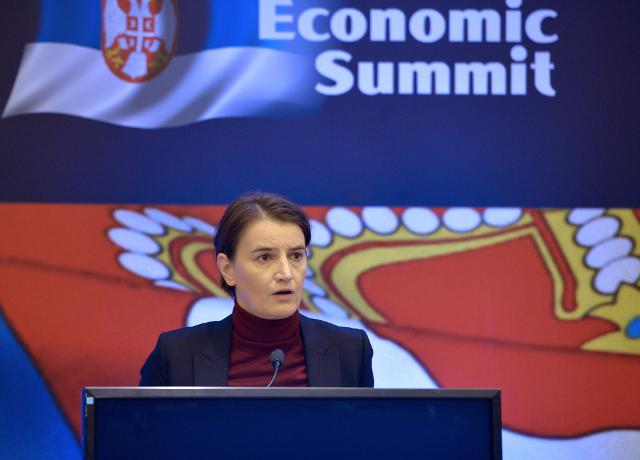 According to the prime minister - whose remarks made during the opening of the 17th Serbian Economic Summit on Monday were cited by the government on its website - this will also "influence a better living standard of citizens."

Brnabic "pointed out that the current government continues the policy of the previous government, which began the difficult, but necessary reforms, reduced public debt, introduced fiscal discipline and consolidated public finances" and said the public debt was reduced by eight percent of GDP this year.

A budget surplus was additionally achieved, which at the end of September amounted to RSD 66 billion, while the growth of foreign trade has stood at about 13 percent this year, exports increased by just over 13 percent, while unemployment has gone down by 5.5 percent, the prime minister pointed out.

Brnabic said that the growth of foreign investments has been recorded, and expressed the belief that we will succeed in achieving growth by around 13 percent by the end of the year.

At the same time, she "expressed particular satisfaction with the agreement between trade unions and employers to increase the minimum wage price by 10 percent, or from RSD 130 to RSD 143, which is very important for 350,000 employees who receive the minimum wage in Serbia."

The prime minister said that, by successfully completing the seventh revision of the arrangement with the International Monetary Fund (IMF) and approaching its end, Serbia has proved that in the most difficult circumstances it is a stable, reliable and professional partner.

It is necessary to turn to sustainable growth, she said, and stressed that the focus of the government is on digitization and education.

Brnabic also pointed to the importance of linking the region's markets, which will lead to more investments and jobs, and thus higher trade.