PM Ana Brnabic and Ambassador of Bosnia- Herzegovina to Serbia Lazar Mirkic "agreed on Monday that political and economic relations are at a high level." 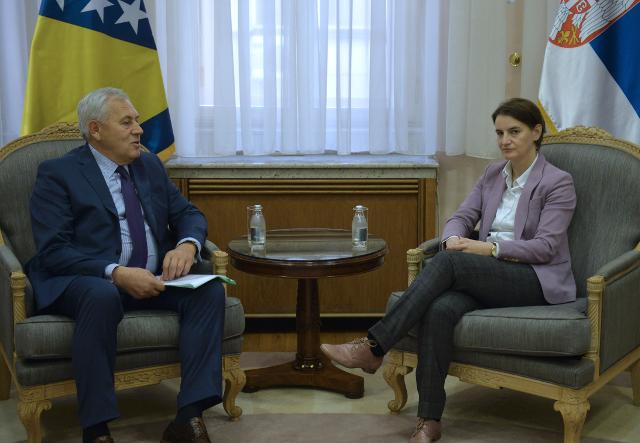 During a meeting in Belgrade, Brnabic and Mirkic discussed the upcoming joint session of the Government of Serbia and the Council of Ministers of Bosnia-Herzegovina, as well as projects in the field of infrastructure, the Serbian government announced.

They also spoke about the European integration of Serbia and Bosnia-Herzegovina, the Berlin Process, the Transport Community, as well as about the political support to the Action plan for regional economic integration.

The two officials noted that the recent visit of Serbian President Aleksandar Vucic to Sarajevo was successful and that on that occasion a great agreement was reached on open issues between the two countries.

Mirkic congratulated Brnabic on the first 100 days of the government's work and said that the success that Serbia has achieved in that period is felt in the rest of the region.