Serbia "feels Turkey as its friend - while we are friends of both Turkey and the Turkish people," President Aleksandar Vucic said on Tuesday. 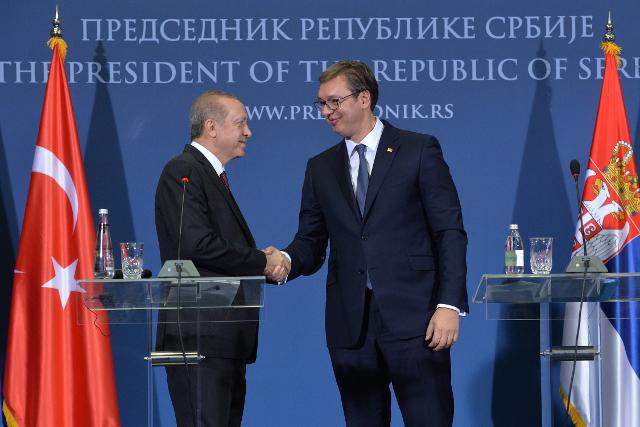 Vucic made the comments during a joint news conference with Turkish counterpart Recep Tayyip Erdogan, held after their meeting in Belgrade.

Vucic appraised that relations between the two countries would continue to improve going forward, and that this message, sent from Belgrade today, will be also be sent from Novi Pazar - a town in southwestern Serbia with a large Bosniak (Muslim) population - when Erdogan visits there on Wednesday.

Apparently referring to the year the Battle of Kosovo was fought - when Ottoman Turks started their centuries-long invasion and occupation of the medieval Serbian state - the president then said that "this is not 1389, as some think - this is 2017."

"Our relations are important for Serbia's future," Vucic said.

He recalled that Serbia was among the first countries whose officials spoke in defense of Turkey's constitutional and democratic order last year - and did this "the same evening a coup was attended in that country."

Vucic said he "in a way" considers coups to be "the highest form of terrorism," and added that Belgrade took the side of Turkey's legally and legitimately elected institutions and the country's president "not because we needed something, but because we think only citizens can be deciding about their own future, in elections."

"Rather than have somebody else do it, using violence, or with the help of a foreign factor," he said, and recalled that Serbia "always expresses its opposition to any violence or even a terrorist act, which is what was attempted in Turkey a year ago can be called."

Vucic recalled also that Serbia "always expresses its sympathies with the victims of acts of terrorism, and its readiness to fight against terrorism together."

"You'll never find those in Serbia who could enter pacts with the opponents of Turkey's legally elected organs, because we base our cooperation on cooperating with you, with those whom the people have elected," Vucic added, and stressed:

"We have nothing to do with (Fethullah) Gulen, or anybody else. Serbia wants clean ties, and clean hands in its relations with other countries."

And just as you don't let anyone endanger Turkey's independence, he continued, addressing Erdogan, so Serbia won't allow it , and insists on its independence and its pride being respected.

"Therefore, don't even think or suspect that Serbia could participate in anything contrary to the decisions made democratically in your country, and by the democratically elected organs," Vucic said, and added he was convinced "we can have the best possible relations."

Speaking during the same news conference, Erdogan said that Novi Pazar represents "a bridge between Serbia and Turkey."

"I will never stand with nationalism, especially not ethnic nationalism, and that is the message I will send to people," Erdogan said, adding that there are "no problems" in Novi Pazar, where he and Vucic will travel tomorrow.

There will be those who criticize the strengthening of the friendship between the two countries, he continued, but they should be ignored.

"We will not pay attention to who's saying what, who's making what comment. After a difficult period we have arrived to where we are now. We want to make big steps with Serbia, but also with the whole of the Balkans, in order to solve all the problems. That is why the road between Sarajevo and Belgrade needs to be built as soon as possible," Erdogan said, stressing that "we need to work together."

"There is no problem. When I go to Novi Pazar with my dear friend Vucic, I will tell our brothers there that their role, too, is to create peace between the two countries. I want to stress that I will never be in favor of any nationalism, and I will repeat this there," he said.

The Turkish president also said he would back Turkish investments in Serbia, and described the signing of 12 bilateral agreements earlier in the day, covering various areas, as"a good foundation for future cooperation."

"There is also room to boost the bilateral trade volume from the present 800 million dollars a year to over one billion by the end of the year," Erdogan told the press conference with Vucic.

Erdogan was officially welcomed in front of the Palace of Serbia this morning, and then had a meeting with his Serbian counterpart Aleksandar Vucic.

He was also scheduled to speak with National Assembly President Maja Gojkovic, and later attend a business forum along with Vucic.

On Wednesday, the Turkish leader will visit the town of Novi Pazar in southwestern Serbia.

In an editorial written for the Belgrade-daily Politika ahead of the visit, Erdogan said that Turkey and Serbia are "two key countries in the Balkans," and that their cooperation is of key importance for maintaining stability, peace, and prosperity in the region, and throughout Europe.

Beta is reporting that the visit of Erdogan - who has arrived here with a delegation of 185 businesspeople - will focus on economic cooperation, with Serbia "interested in attracting more Turkish investors."

The Turkish Stream natural gas pipeline will also be discussed, while the two countries should sign a new free trade agreement and several other investment deals.

The report noted that bilateral trade reached USD 900 million in 2016 and is expected to exceed one billion this year. From January to August 2017, Serbia sold goods to Turkey worth EUR 442 million, while imports stood at USD 284 million, the report said.

The Belgrade-based daily Blic is reporting on Tuesday that the visit will pass under unprecedented security measures, that will "put to shame" those that had been in place for the visits of top Russian and US officials.

About 3,000 police will be deployed in the streets of Belgrade, while the route of Erdogan's motorcade during his stay in the capital has not been announced - so it remains unknown which streets would be shut down partially or completely.