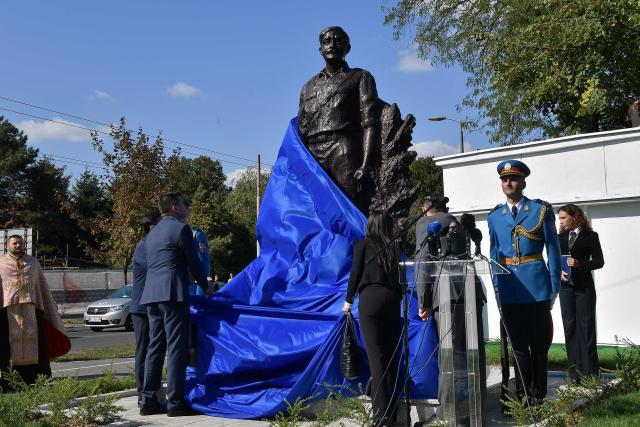 The monument to JNA hero Milan Tepic in Belgrade (Tanjug)

State Secretary of the Ministry of Foreign Affairs Nemanja Stevanovic summoned Croatia's charge d'affaires to deliver the protest note - that came in reaction to "the comments by Croatia's Ministry of Foreign and European Affairs and its public statement following the erection of a monument to Milan Tepic, a JNA (Yugoslav People's Army) officer hero, in Belgrade."

According to the statement, Stevanovic said it was "shameful that Croatian officials, glorifying the ideology of Ustasha and their crimes committed in the Second World War and whipping up an anti-Serb hysteria and grossly violating human rights in the 21st century, protested against hero Tepic, an embodiment of honor and morals."

"To use the unveiling of the monument to Major Tepic to accuse the Republic of Serbia again of 'armed aggression' was not only totally unfounded and baseless from the legal and historical point of view, but also highly hypocritical," the Serbian MFA said, and added:

"In the talks concern was raised in particular because of the fact that Croatia had not made any serious progress on distancing itself from the growing trend of revival of Nazism and historical revisionism. This also included, among other things, erection of a monument to Ustasha terrorist Miro Barisic, convicted of killing the Yugoslav Ambassador to Sweden, and mounting of a plaque with a Nazi salutation 'For Home Ready' in Jasenovac, the most notorious place of execution of more than half a million Serbs, Jews and Roma.""

"More concern of the Ministry of Foreign Affairs of the Republic of Serbia is caused by the fact that the attacks and offenses coming from the Republic of Croatia at the expense of Serbia and the Serbia people as a whole were getting worse at a time when Serbian President Aleksandar Vucic publicly stated the country's commitment to a comprehensive development of good-neighborly relations with Croatia," the statement said.

Later in the day, the Croatian Foreign Ministry announced that their charge d'affairs in Belgrade "fully rejected the allegations from Serbia's protest."

"The Serbian officials' repeatedly presented public statements about Croatia are fully rejected as unacceptable, unilateral, and tendentious, and above all, arbitrary and malicious," the agency Hina reported.

The monument to Major Tepic was unveiled in Belgrade's Dedinje neighborhood last week, on the anniversary of his death in the Croatian town of Bjelovar on September 29, 1991.

Instead of allowing Croatian paramilitaries, who had an army barracks and a large arms depot surrounded, to take the weapons over, he and another soldier, Stojadin Mirkovic - the only ones left in the facility - decided to blow it up, knowingly sacrificing their own lives.

According the Croatian side, 11 Croat paramilitaries also died in the explosion.

"His intention was to cause an explosion of the whole depot, which, had the Croatian hero defenders not prevented him in that insane intention, would have leveled Bjelovar to the ground. On that occasion 11 Croatian defenders died," said the Croatian MFA's original protest on Oct. 2.

Commenting on Croatia's objections to Serbia honoring the officer, Foreign Minister Ivica Dacic on Oct. 3 described it as yet another example of the neighboring country's "madness" and "anti-Serb hysteria."

"It is clear that Croatian officials have an incurable disease, and that is their anti-Serb hysteria. It's not there only in election campaigns," he told RTS.

Dacic said he could not see why Croatia was reacting - and noted that its leaders glorify the Ustasha movement, raised a monument to terrorist Miro Barisic, and put up sings featuring a fascist WW2 Ustasha salute.

"That country's officials are protesting because of a monument to Milan Tepic, a JNA officer who gave his life for his country, who took an oath to defend his garrison and his soldiers during the illegal formation of Croatia. He is a moral giant compared to them," Dacic concluded.