MiG-29s arriving to Serbia from Russia aboard An-124s/VIDEO

Two disassembled MiG-29 fighters that Russia has donated to Serbia arrived to the country late on Monday aboard a Russian Antonov An-124 transport plane. 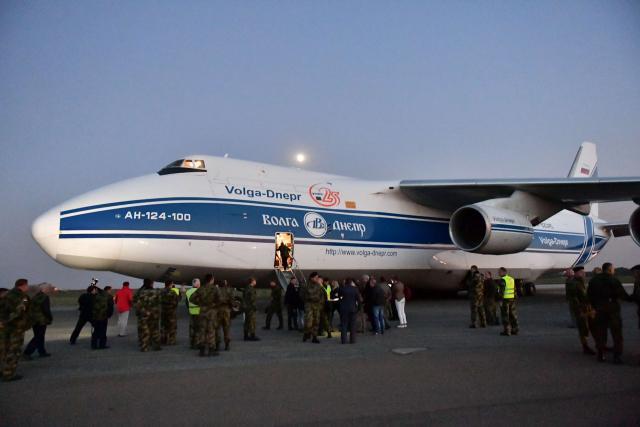 Another two were transported on Tuesday afternoon, while the plan is for all six warplanes to be transported to Serbia in this way by Friday, October 6.

The An-124 was welcomed with a ceremony last night at the military airport Batajnica near Belgrade, and by Defense Minister Aleksandar Vulin, Serbian Army (VS) chief General Ljubisa Dikovic, and Air Force and Air Defense (RV PVO) commander General Ranko Zivak.

Vulin said the information had been received that the agreement by Serbian and Russian presidents about Russia's military-technical assistance - reached late last year - would be fulfilled on October 2, and that this had happened.

"By Friday, the remaining four planes will also arrive and we will be able to say with pride that for the first time since 1987 our Air Force is receiving new aircraft," Vulin said.

"Today is a great day for our Army and our Air Force, because after dozens of years we are receiving planes, which is very important for the overall defensive capability of our country," said Dikovic. He thanked the president and the government for securing the aircraft and stressed that the Air Force had been "saved by today's act."

Zivak emphasized that this was "a historic day for our Air Force and Air Defense," adding that these aircraft will be a significant contribution to Serbia's capabilities, and that members of the RV PVO will do their best to ensure that security of the Republic of Serbia and its airspace is at the highest level.

Some citizens also gathered last night near the military airport to see the arrival of the Antonov, Vecenje Novosti has reported.

Russians technicians have arrived along the MiGs to help their Serbian colleagues assemble the planes.

The MiGs, that have been repainted before they were disassembled and transported, have new markings - the Serbian tricolor. They will have to be overhauled after they are shown publicly, said the daily Blic.

According to Sputnik, Russian Defense Minister Sergei Shoigu will attend the October 20 celebrations in Belgrade.