PM Ana Brnabic and Greek President Prokopios Pavlopoulos agreed on Monday in Blegrade that bilateral relations between the two countries are traditionally good. 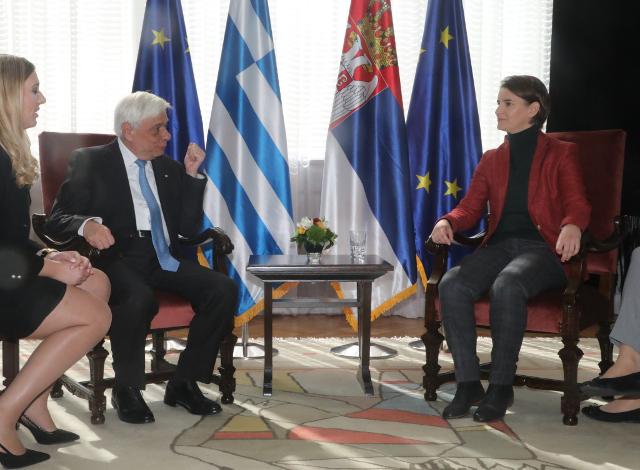 But that there is room for their improvement, especially in economic cooperation, the Serbian government said in a statement after the meeting.

During a tete-a-tete meeting with Pavlopoulos at the Palace of Serbia, Brnabic recalled that Greece is one of the major investors in Serbia, with around EUR 2.2 billion in investments.

She "thanked the Greek president on his country's active approach within regional initiatives and a strong support to the European integration process of Serbia and other countries of southeastern Europe."

Earlier in the day, Pavlopoulos met with his Serbian counterpart Aleksandar Vucic, and then held a joint news conference during which they said that the two states had developed a relationship without open issues.

Athens supports Serbia's EU accession and territorial integrity, they said, and suggested that the second session of the High Council for Cooperation between Serbia and Greece should take place as soon as possible, Beta is reporting.

Vucic said that the first session held recently in Thessaloniki had already produced results, and asked Greece if it would agree to holding the next be in Belgrade early next year.

Until then, a document should be passed on strategic integration and partnership between the two states, he said, and added that Serbia and Greece had developed a truly brotherly relationship, and thanked Greece for having supported the integrity of Serbia and the country's EU accession. The Serbian president explained that the European framework had "probably made relations more important than ever."

Greece has always supported the opening of chapters in Serbia's negotiations with the EU, Vucic said, confident that this support would continue in the future, in the same measure or even stronger.

The Serbian president said that with his Greek counterpart he had discussed bilateral economic and political cooperation and the situation in the region, and that "a high level of accord" had been reached on all regional issues.

Trade between Serbia and Greece should reach EUR 450 million this year, Vucic said, adding that he hoped the figure would be 50 percent higher next year.

The Greek president described bilateral ties as exceptional, suggesting that the High Council should meet again as soon as possible, as the first session had been extremely productive.

Pavlopoulos expressed the hope that when the next presidential visit to Serbia takes place, the country will already have joined the EU.

Serbia's road to Europe is open, Pavlopoulos said, expressing his country's readiness to assist Serbia in every possible way in the EU integration process.

Serbia and Greece are cooperating with great values and objectives in mind - security, stability and international legitimacy, in particular in our region, and those are the foundations of our cooperation, Pavlopoulos said in a speech in the Serbian National Assembly.

The cooperation between Serbia and Greece is particularly significant today, in a sensitive time for Europe and the world - in particular for this region - and it is based on the fight for two great ideals: freedom and independence of our two nations, he said.