After the Catalan referendum and European Commission's position that it was illegal, "it must be clear how difficult it is to safeguard Serbia's independence." 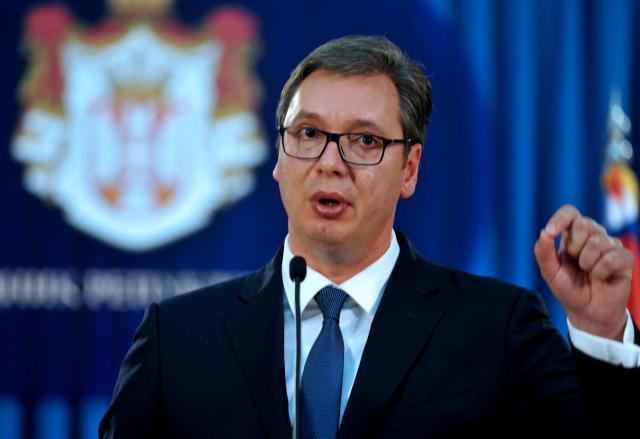 President Aleksandar Vucic said this on Monday in Belgrade, responding to reporters' questions during a news conference.

"The question every citizen of Serbia has for the European Union today is: how come that in the case of Catalonia the referendum on independence is not valid, while in the case of Kosovo secession is allowed even without a referendum," Vucic continued.

"How did you proclaim the secession of Kosovo to be legal, even without a referendum, and how did 22 European Union countries legalize this secession, while destroying European law and the foundations of European law, on which the European policy and EU policy are based?," Vucic asked.

Tanjug is reporting that Vucic went on to "publicly ask" how he was supposed to explain European integration of Serbia to Serbian citizens now - "although, without a doubt, Serbia sees its future in the EU, because of the type of society we striving towards, as well as for the sake of a better economy, and for other reasons."

"So, how come Catalonia cannot, and Kosovo can - there will never be an answer on this given to the Serbs," Vucic noted.

The global centers of power played games when they thought they could redraw borders in the Balkans because the region does not belong to the European Union - but now, when the chickens have come home to roost, the situation becomes "very serious," he observed.

"This is the best example of the double standards and hypocrisy of the world politics," said Vucic.

He also remarked that during his visit (to Moscow), his meeting with Russian President Vladimir Putin was "interesting to all Western media journalists" - while the meeting with Putin of Germany's Sigmar Gabriel, the same day, "was not registered by anyone."

"It must be clear now how difficult it is to safeguard the independence of Serbia," said Vucic, and added that his message "to everyone putting pressure on our country" was to now take a vacation - "because at least as far as our country is concerned, I will not listen to them anyway - let them deal with the chickens that are back home to roost."

A short while later in the day, B92 was able to receive confirmation that the president had called the prime minister, all members of her cabinet, and representatives of intelligence and security agencies for consultations.

The meeting, scheduled to start at 16:15 CET on Monday, will deal with the Catalan independence referendum and EU's statements regarding a lack of any parallels with the Kosovo situation.