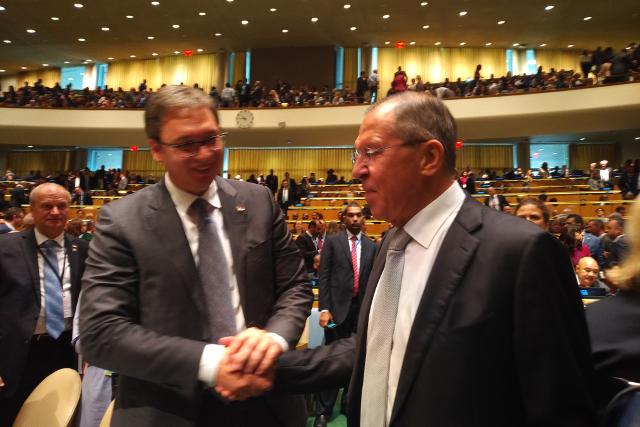 In their conversation, the officials, who are in town for the UN General Assembly, "highlighted the friendship between the two countries."

Lavrov said that Serbia is a pillar of stability in the Western Balkans and a friend of Russia - and that Serbia's territorial integrity and sovereignty will always be supported by Russia.

"Russia is a true friend of Serbia, and we will continue to work on improving cooperation at all levels, both politically and economically," Vucic said, according to a statement issued by his cabinet.

Vucic also "expressed his gratitude for the support Russia provides to Serbia, both in the UN and in international fora, as well as for supporting the territorial integrity and sovereignty of Serbia."

He emphasized that Serbia does not intend to become a member of NATO, or any other military organization, and that it does not plan to impose sanctions on Russia.

Lavrov especially stressed the importance of Serbia and Russia forming an industrial zone, and said that intensive bilateral relations could and should be even better, the statement said.