Trump "reacts positively" to Serbian front pages about him

Serbia's foreign minister has revealed the content of his brief conversation on Monday with the US president, during a gathering at the UN HQ in New York City. 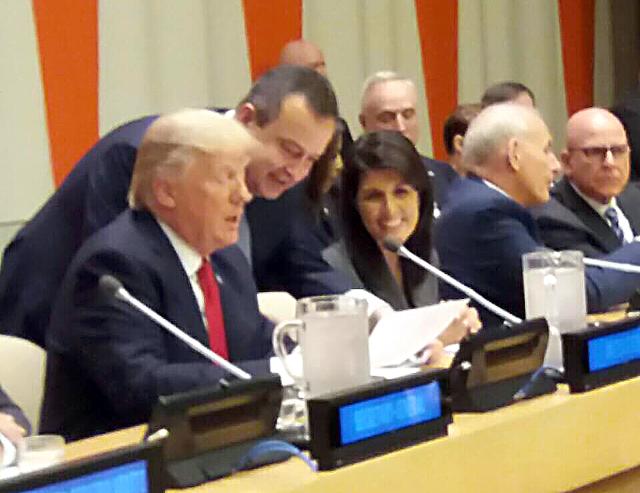 Just before the meeting started, Ivica Dacic approached Donald Trump and spoke to him, and also showed him some papers. Many then wondered what these papers were. A video showed that Trump was interested in what Dacic was showing him, but it remained unknown on Monday what it actually was.

Speaking on Tuesday, Dacic - who is a member of the Serbian delegation led by President Aleksandar Vucic at the UN General Assembly this week - said that "various gatherings are an opportunity to have informal meetings and conversations, such as that with Trump."

"So this time as well, before this meeting, I talked to Boris Johnson about the celebration of the 180th anniversary of diplomatic relations (between Serbia and Britain) in the Foreign Office, with Miroslav Lajcak about the possible application of Kosovo for UN observer status, and to US President Trump, whom I first met four years ago, I brought photocopies of the front pages of all our newspapers from the time he was elected," Dacic told Tanjug.

He recalled Vucic's invitation to Trump to visit Serbia. "Serbs cheered for him the most," Dacic said of Trump as a candidate, adding that Serbia is awaiting his arrival as the first US president to visit after Gerald Ford.

According to Dacic, Trump "responded positively, he was glad, and provided a contact person" - and also "asked if Ana Ivanovic was still playing tennis."