Relations between Serbia and Austria are "very good, and need to be further developed in the interest of whole Europe." 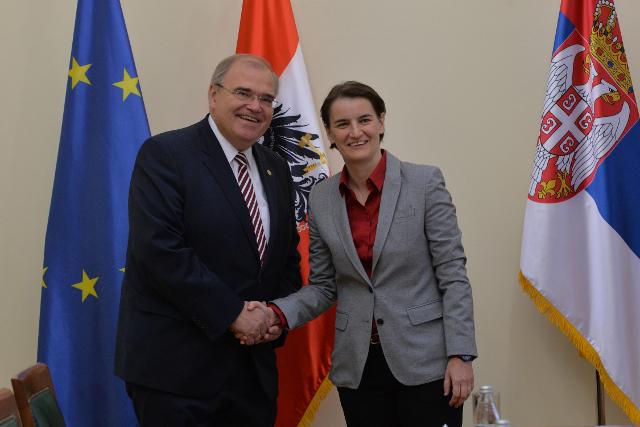 Prime Minister Ana Brnabic and Vice-Chancellor and Minister of Justice of the Republic of Austria Wolfgang Brandstetter said this during Thursday’s talks in Belgrade, the Serbian government said on its website.

Brandstetter "praised Serbia's progress in economic reforms and reiterated Austria's support for Serbia's European integration" and "stressed that it is in the interest of all members that the European Union is strengthened faster and that Serbia becomes a part of it as soon as possible."

The Austrian official "pointed out that it is very important for Serbia to continue implementing the necessary reforms in the areas in which it is needed, primarily in the field of economy and the rule of law" and announced that the rule of law would be Austria's priority during the EU Council presidency next year.

Brnabic said that the new government "remains committed to economic stability, the rule of law and more efficient judiciary, regional stability and European integration of Serbia" and "pointed out that e-government remains her priority."

She thanked the government of Austria for support "in the field of e-justice and announced that Serbia will begin implementation in this area as soon as possible."

Brnabic and Brandstetter "agreed that it is very important to work together on combating cyber crime and that it is necessary to jointly coordinate activities at the level of Europe."

Brandstetter told the Serbian prime minister that his country will next year mark 100 years since the end of the First World War - and invited Serbia - which Austria-Hungary attacked in 1914 to start the war - to join the marking of this "very important date for Europe."