Following the announcement of internal dialogue on Kosovo, Albanian lobbyists are busily preparing a resolution for the UN in order to give Kosovo a chair. 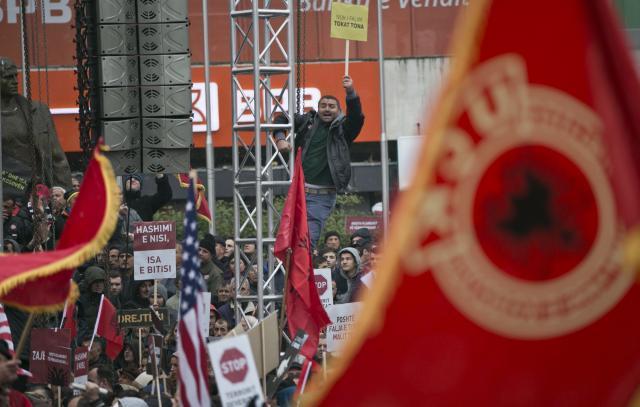 According to Sputnik, lobbyists in America are working on the draft, helped by the Clinton Foundation, and their plan is for Kosovo to gain the status of "an observer state," modeled after Palestine.

The United States allegedly intends, as Sputnik claims, to in this way circumvent the UN Security Council, whose members have veto power - and if Pristina, with the help of the United States, succeeds in achieving its goals before the end of the negotiations in Brussels, talks between Belgrade and Pristina "would exit their status-neutral format."

At the same time, "Clinton's America" is in a hurry to realize this idea as soon as possible also because of Turkey, i.e.,"the growing support of Istanbul to the project of 'Greater Albania' - because official America is not in favor of redrawing borders in the Balkans."

Kosovo President Hashim Thaci recently said the United States should officially join the negotiations in Brussels. Also, a letter from US Congressman and Albanian lobbyist Eliot Engel has surfaced, sent to the head of EU diplomacy, Federica Mogherini, that stated Serbia was "not ready for the EU."

All this aims to slow Serbia down in the resolution of the Kosovo issue through internal dialogue, in order to gain time and realize their intentions regarding the UN, claims Sputnik.

"But, where there is smoke, there are also fire - so the impression is that now America cares more about getting involved in negotiations in Brussels, than does Kosovo - and the question is why," Sputnik writes.

Stefan Surlic, an assistant professor at the Faculty of Political Science, recalled that "America has invested much money and diplomatic efforts so far to ensure Kosovo's independence."

"Considering that negotiations between Pristina and Belgrade are entering the final phase, Washington has a reason to become a formal part of the negotiations and of the final agreement," he said.

"The whole initiative that is coming from Washington, Brussels and Berlin looks like a desire to prevent the creation of 'Greater Albania', because, regardless of previous interpretations, the creation of any large state in the Balkans does not suit America, or other great powers. The strengthening of Kosovo's independence and the presence of Pristina internationally ensure that such a scenario will not happen and I think it is the interest of the United States to be involved in the dialogue between Belgrade and Pristina," Surlic said.

He added that "Belgrade's initiative for internal dialogue has been launched so that Belgrade could determine its 'red lines' in Kosovo, and in that regard serious consideration is given to preventing a UN chair being given to Pristina."

"Regardless of the fact that Serbia is not diplomatically strong, it has strong trump cards in its hands, and above all the fact that five EU countries have not yet recognized Kosovo and that without their consent it will certainly not become a full member of the UN. These two key dimensions open up space and the possibility for Serbia to determine what it can allow Pristina and what it will keep for itself in the context of ending the dialogue between Belgrade and Pristina," he said.

Asked if, and to what extent, negotiations between Belgrade and Pristina would change if Pristina succeeded, with the help of America, in "grabbing the UN (chair) in any form," Surlic said:

"First of all, this initiative should be preceded by a serious diplomatic struggle to secure the votes of two-thirds of the members of the UN, and that would surely carry with it a strong political and diplomatic message for the dialogue between Belgrade and Pristina, and at the same time it would represent very strong pressure on Serbia. The mere fact that more than two-thirds of the world's countries would recognize Kosovo as a separate state would mean defeat for Serbia and additional pressure to make concessions to Pristina," he believes.

A resolution that would propose to make Kosovo an observer would be put up for a vote at the UN General Assembly, that is, all 193 UN members would vote. "In this way, there is danger that Kosovo could officially receive an international birth certificate as a state," Sputnik writes on its Serbian language website.