Prime Minister Ana Brnabic says that relations between Serbia and Slovenia are "good and friendly." 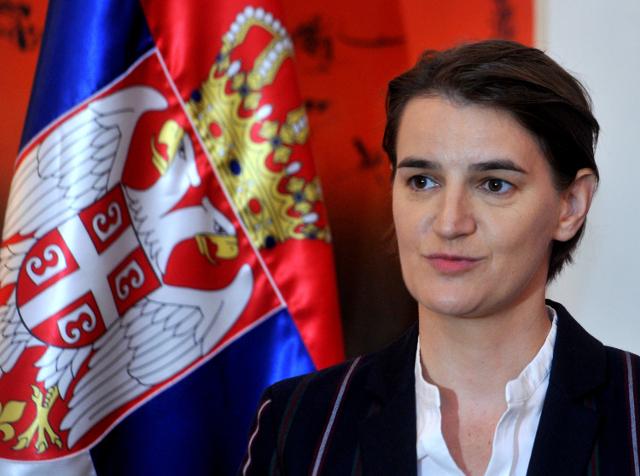 Slovenia is one of Serbia's largest economic partners and provides strong support to Serbia on its European path and its experience in many areas is of exceptional importance useful for Serbia, primarily in the local administration, she said late on Sunday.

On the eve of the Strategic Forum in Bled, Brnabic met with Deputy Prime Minister and Minister of Public Administration Boris Koprivnikar, with whom she discussed a number of issues related to the promotion of the cooperation of the two countries, especially on how to become more modern, more advanced and more helpful to citizens, the Serbian government announced.

"We talked about how Serbia can move faster, primarily for the benefit of its citizens, in order to get more efficient services and economy," she said, and recalled that while heading the Serbian Ministry of Public Administration and Local Self-Government, she early this year in Ljubljana signed an agreement on cooperation on digitization of public administration.

Serbia organized the Office for Public Administration and Digitization after the Slovenian model, Brnabic said, and "pointed out that Serbia has very good political and economic relations with Slovenia."

"Slovenia is one of our most important trading partners and investors with more than one billion euros of investments, and with over 600 companies employing 35,000 people in Serbia. I am honored to have the opportunity to talk with the representatives of the government of Slovenia on the continuation of the expansion of our cooperation, which in terms of trade from 2015 to 2016 jumped by five percent, and I expect that this trend will continue," she said.

Brnabic "stressed that it is very important to mention that Slovenia is a true advocate of the EU enlargement and European integration of Serbia and that it offers great support to our country on this path" and "reminded that Serbia with Slovenia are part of the Berlin Process, and that there are two common priorities in this regard – digitization and cooperation of young people. In many respects, our focus is coincidental."

Boris Koprivnikar said he was looking forward to continuing cooperation with Brnabic, and explained that the projects being worked on "are aimed at better functioning of the entire government and the public sector."

Koprivnikar "assessed that the two countries have friendly relations and that Slovenia supports Serbia in its efforts to make the public administration more modern, more efficient, in line with world trends," and "pointed out that the world is constantly changing and that governments must respond quickly and decisively to the benefit of their citizens."

Brnabic is in Slovenia on Sunday and today, together with her first deputy and foreign minister, Ivica Dacic, for the Bled Strategic Forum, which gathers "high-level officials from the European Union, countries of the region and international organizations," the Serbian government announced.