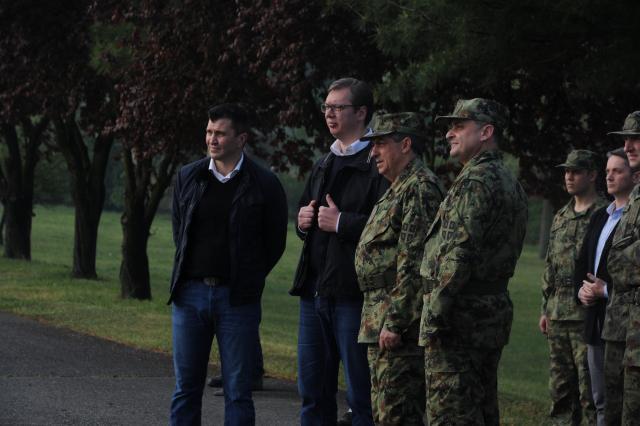 According to a statement, carried on Thursday by Beta, this happened in early August, with 80 specially trained officers getting reassigned to various other police units.

PSS President Veljko Mijailovic said that the union was "surprised to say the least" by this development. According to him, a unit that has "for years" provided security to Serbia's presidents has been disbanded "overnight."

"Does that mean that Vucic no longer trusts the police - but that he does trust the new defense minister, Aleksandar Vulin?," Mijailovic asked, and noted that "by law, the decision had to be adopted by the government, and signed by Interior Minister Nebojsa Stefanovic."

Beta said that there has been no official confirmation that this indeed happened. The implication of the report is that the military is now in charge of the president's security.

Reacting to the PSS statement, the Interior Ministry (MUP) on Thursday described this union as a "political organization" and said the claim made about the disbanding of the Department for Protection of the President of the Republic - from the Unit for Protection of Specific Persons and Facilities - was "incorrect and completely malicious."

A MUP statement said the following:

"President Aleksandar Vucic - ever since he served as the defense minister, but also the prime minister - has had his security provided by members of the Serbian Army. It is saddening that representatives of the Police Union of Serbia and their leader Veljko Mijailovic are unaware that, according to the Constitution, the president of Serbia is the supreme commander of the Army, and that it is therefore completely natural and normal that his security should be provided by the members of the Serbian Army."

The PSS is denounced as becoming "a political, rather than a trade union organization - something everyone is clear on."

"Their only intent is to mislead the public, which they do amply and each day, in order to gain some points in favor of those giving them their political orders. The MUP has in recent weeks embarked on a rationalization and has decreased the number of commanders, while team and group leaders, and those serving in identical positions have kept their jobs - but in other departments of MUP's Protection Unit," the statement said, adding that this unit "continues to support the Serbian Army in providing security to the president of the Republic - in the portion that falls under the police jurisdiction."