The staff of the embassy in Skopje has been withdrawn after evidence was received of "very offensive activities against Serbian authorities and institutions." 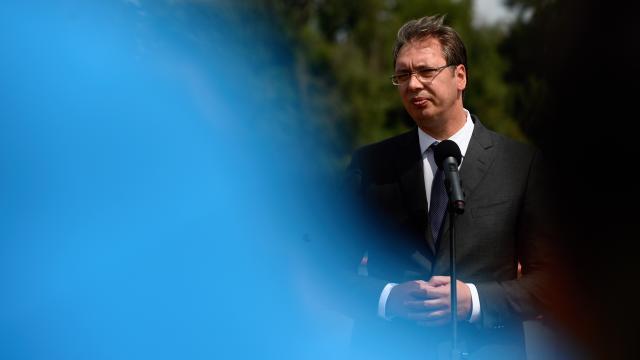 Serbian President Aleksandar Vucic said this on Monday, a day after it emerged that the entire staff had been withdrawn to Belgrade.

"It's up to us that our people are prepared and ready. There will be some changes in our staff (...) and to protect our friendship with the Macedonians, and also how to behave in the new environment. There is a lot of speculation and I think that in the next ten days everything will be much clearer," said Vucic, and added:

"We will build good relations with Skopje, but relations will have to be based on mutual respect. We will see whether the Albanians will go forth with including Kosovo in UNESCO, then we will wait for what Skopje and Podgorica will say. It up to us to prepare ourselves and to be able to respond."

Vucic also said that there was evidence of "some other powers" meddling in the situation.

Asked whether he "had Russia in mind," the president replied:

"I didn't even think about Russia."

Foreign Minister Ivica Dacic said today that employees of the Serbian wmbassy in Macedonia have been withdrawn because there was evidence of "offensive actions against Serbia, with the presence of the foreign factor."

Dacic said in a statement to Tanjug that the state of Serbia will take measures to protect its interests in Macedonia, and at the same time "reexamine our capacity to carry out work under current conditions in that country."

"Next week, after meetings that we will have here - and we will have a meeting with President of the Republic of Serbia Aleksandar Vucic - some of our staff will be returned to Skopje, and the ambassador will be returned later, when we finish all the consultations we intend to implement here in Belgrade," Dacic told the agency.

He explained that employees of the Serbian embassy in Macedonia have been withdrawn "because it has been determined unambiguously, with clear evidence, that there has been an increased offensive activity against the Republic of Serbia, where the foreign factor is also certainly present."

"We will take measures to prepare for work in such an environment," the minister said, but also stressed that Serbia "wants good relations with Macedonia."

Earlier in the day, Sputnik reported that "one of the reasons" for the withdrawal of the embassy's staff was Skopje's preparation to vote in favor of Pristina's possible renewed bid to join UNESCO - which Belgrade is strongly opposed to, arguing that Serbia's cultural and religious heritage in the province would be further endangered in this way.

In 2015, Skopje voted in favor of admitting Pristina - something that has since been mentioned disapprovingly on several occasions by Serbian officials, Dacic in particular.