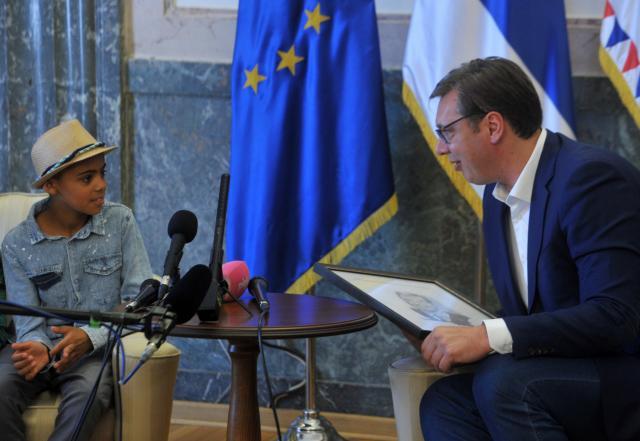 Farhad, whom the media have nicknamed "Little Picasso," recently took part in a humanitarian campaign by selling his drawings in order to raise money for the medical treatment of a seven-year-old Serbian boy.

Vucic said it was his desire to keep "the artistic, but also the human talent" of Farhad Nuri and his family in Serbia.

Vucic, who received Farhad at the Presidency on Wednesday, also offered the child a scholarship so that he could continue painting, said many companies were interested in hiring his father, a plasterer, and that the whole family could become Serbian citizens if they wished to.

Farhad, who temporarily resides with his parents and brothers at the Refugee Center in Krnjaca, said that he would like to stay in Serbia - although the family had originally intended to go to Switzerland.

"It's up to me to offer that you become citizens of Serbia. We would be honored if you accepted," Vucic said.

The president remarked said that Switzerland is a richer country, but that he was certain that Belgrade is "a much better and more beautiful city than any other."

Vucic also told the boy that considering his talents - such as learning to speak "excellent" English in only ten months - he could one day become Serbia's president - "if he wanted that at some point."

"Our policy is a policy of sincere friendship, solidarity and love for refugees and people who are seeking a future - and if you see your future in Serbia, you are welcome in our country. Everything is up to you, no one is making you do anything."

In conversation with Vucic, Fahred Nuri said that he would like to stay in Serbia.

"I want to live in Serbia. We feel good in Serbia," he said, speaking in Serbian, and thanked the country for everything it is doing for his family.

"When I would draw something like this in Afghanistan, nobody paid any attention to it," the boy remarked.