Serbian President Aleksandar Vucic, who was on a one-day working visit to Rome on Tuesday, met with Italian President Sergio Mattarella. 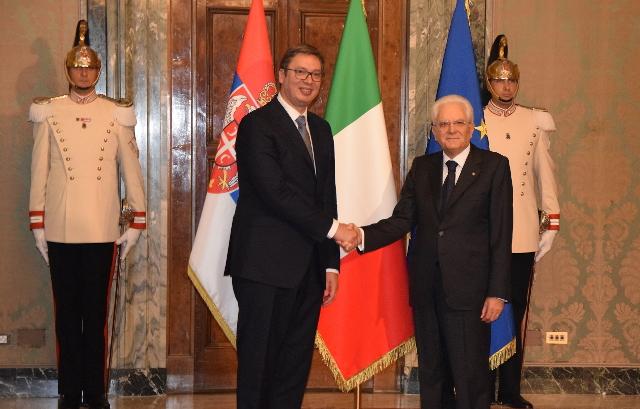 According to Tanjug, Mattarella "noted Serbia was a leader in terms of regional stability."

"That is why your entry to the EU is very significant," Mattarella said during a meeting with Vucic.

Italy wishes Serbia to join the European Union, as soon as possible, the Italian president said, according to Beta.

"And that's one of the basic elements of our foreign policy. Serbia is a leader of regional stability, which is why your entry into the EU is very important," Mattarella said during the meeting.

Mattarella "congratulated Vucic on his new duty, emphasizing that his visit to Italy confirmed great friendship between the two states," the press release said, and added that the Italian president noted that the growing presence of Italian entrepreneurs in Serbia confirmed the development of the two states - while "a lot has been done in the fight against terrorism and corruption, and in joint projects."

"Serbia can be successful in EU integrations, but it can also keep its traditional relations," said Vucic.

Addressing reporters in Rome after the meetings, the Serbian president announced he would initiate a trilateral meeting of Serbia, Italy and Albania that would be aimed at forging closer ties and participation in joint projects.