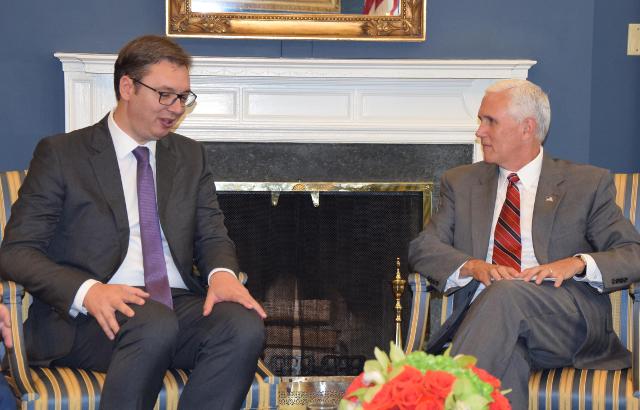 According to Vucic, he and Pence agreed to have personal communication in future.

He assessed that the meeting in the White House has "further contributed to creating greater mutual trust."

"We agreed to continue our personal communication and I think that this meeting, after an important conversation with senators and congressmen, further contributed to the strengthening of Serbian-American relations, creating greater trust and an even stronger friendship," Vucic told reporters.

He said the meeting was excellent, and noted that he congratulated US President Donald Trump and Pence on their election victory, "but also on the important things they are doing for their country."

Vucic said he invited Trump and Pence to visit Serbia, as he believes they will have the best welcome in this part of Europe, and beyond, "precisely in our country."

Speaking for TV Pink after the meeting, the Serbian president said he was very satisfied with the content of the conversation, the tone and the way of communication, the topics, and the interlocutors' agreement on a number of things that they discussed.

He said that he talked with Pence about all open issues: relations in the region, bilateral relations, how to attract as many US investors as possible.

"The third level of the conversation was the global problem with terrorism, and a natural theme was the relationship with Russia," Vucic said, adding that he spoke "very openly, with gloves off."

"Serbia cannot meet everyone's requirements. We have an independent policy and we cannot respond to all questions in a way the host wants. Pence was very fair and I did not put me in a difficult situation for a moment," said Vucic.

"The United States is not an enemy of Serbia," he continued, adding that "we must work to have a different US attitude towards Serbia."

"We will not agree on everything, it is not realistic and possible, but these differences should not make our relationships worse. Serbia must have a stable position and cannot be endangered. Serbia guards the freedom of its citizens and the freedom to make decisions. We are nobody's pets, everyone respects us," Vucic said.

He noted that he congratulated Trump and Pence on their victory, and told the latter that Serbia was "the only country in the region that greeted the result with great enthusiasm."

"This speaks to Serbia not having an anti-American attitude, and that it wanted to show how much it wants open relations with the United States," Vucic said.

Vucic also said that he expressed a clear position to the US vice president when it comes to relations with Russia - "how Serbia views certain things in the region, and where and on what issues it has the Russian Federation's support, that is lacking from other countries."

Asked how Pence reacted to this, Vucic replied:

"I was very open. I talked a little differently, with gloves off, and at one point Pence said he liked that I was speaking openly."

Vucic gave no details about that part of the conversation, but said, referring to those who attended the meeting, that they could be "proud of the way he spoke to Pence."

"One is not here to respond in a way somebody wants one to. My job is that Serbia is not opposed to the United States. Serbia has its own independent policy and we will try not only to preserve it but also to build a friendship with the US," said Vucic.

He added that he "did not respond to everything in a positive way, but did do it in a rational way. "

According to Vucic, Pence "understood well what he was talking about."

"I talked about what Serbs feel, and how they feel neglected, sometimes humiliated, and that all of us must somehow change that. I think that is more balanced - to strive for everyone in the region to be satisfied to a degree, instead of Serbs always being sad and dissatisfied, humiliated, while others are satisfied," Vucic said.

Speaking about the part of the meeting that concerned the 1999 killing of the Bytyqi brothers, Vucic said Pence's approach was "fair":

Vucic also spoke with the chairman and the ranking member of the US Senate Subcommittee on Europe, Ron Johnson and Chris Murphy.

Washington recognizes that issues in the Balkans cannot be solved without leadership from Belgrade, the two senators said on Monday.

After meeting with Vucic, they said Washington understood very well the significance of stronger cooperation among the US, Serbia and the EU.

Earlier in the day, Vucic spoke with representatives of US companies that included Cisco Systems, General Electric, NCR and Coca-Cola to present possibilities for investment in Serbia, to which they responded positively and with interest.

Vucic also attended a working breakfast with the Business Council for International Understanding, hosted in his honor on Capitol Hill.

The Office of the Serbian president said that Vucic had briefed the BCIU on Serbia's economic reform over the past two years, and the country's efforts to improve the terms of doing business with foreign investors.

Vucic said that Serbia had made important investments in the national road infrastructure, that it is a politically stable state, offering a package of incentives to foreign investors, which makes it one of the best investment destinations in the West Balkans.

Upon his arrival in the United States on Sunday, Vucic said that he expected "important talks for Serbia" to take place during his visit.

"I see from the announcements that they will be interested in Belgrade's stance on Pristina, and the stance toward Russia. We will speak about out positions and try to get support for a policy of seriousness, responsibility and problem-solving in the Western Balkans," Belgrade media reported Vucic as saying, according to Beta.

He said that the 2008 torching of the U.S. embassy in Belgrade would be mentioned too, as would the case of US citizens the Bytyqi brothers, slain in Petrovo Selo in 1999, the agency reported.

His two-day visit to Washington began on Sunday with a meeting with Chief of the Bureau of National Guard USA Joseph Lengyel and Major General Mark Bartman, commander of the Ohio National Guard.

"The Republic of Serbia has a consistent policy of military neutrality and integration policy towards the EU as a strategic foreign policy objective, with a commitment to maintaining peace and stability and economic prosperity of the Republic of Serbia and the entire region of the Western Balkans," Vucic said, Tanjug reported.

Lengyel highlighted the importance of the relationship between the US National Guard and the Serbian Army for both countries. "Our partnership is important for the region's peace and stability," he has been quoted as saying.

Vucic said he was grateful for the deployment of Ohio National Guard members in Kosovo and Metohija. The two collocutors stressed the importance of the program of humanitarian assistance within the partnership with the Ohio National Guard, especially in towns like Kraljevo, a press release quoted by Beta said.