"We're not asking EU for exact date, we're not blackmailing"

Getting a timeframe for becoming an EU member state would be significant for Serbia, Serbian President Aleksandar Vucic said in Thessaloniki on Thursday. 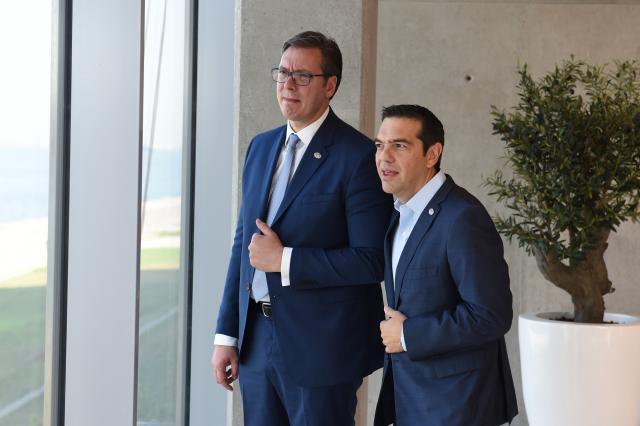 At a press conference with Greek Prime Minister Alexis Tsipras, Vucic said Serbia "does not want to blackmail anyone or make demands, but to know there was a perspective in terms of when it could become an EU member state."

He added that this means the country would "fulfill all conditions, especially from chapters 23 and 24, as well as all others necessary for membership."

"We think this is important so that people in Serbia are better and more significantly motivated and stimulated. We are not asking for the exact year (to join the EU), but we want to know the framework when Serbia might become a full-fledged member," Vucic said, and stressed that he "pleaded with PM Tsipras to help us get an answer on that question."

Vucic said this a day after he told Italy's ANSA agency that Serbia was "no longer willing to listen to promises" and instead wanted the EU to say "whether, and in what time-frame, it is interested in Serbia's membership."

Earlier on Thursday, Vucic and Tsipras had a closed-door meeting that lasted longer than the planned one hour, Tanjug reported.

They agreed on a joint declaration to be adopted by the High Council for Serbia-Greece Cooperation.

Serbian and Greek cabinet ministers then signed a number of inter-state agreements.

Vucic is in Thessaloniki today leading a Serbian delegation in the first meeting of the High Council, and will also take part in the trilateral meeting between Greece, Serbia, and Bulgaria.