Vucic and Thaci "agree to work on new phase of dialogue" 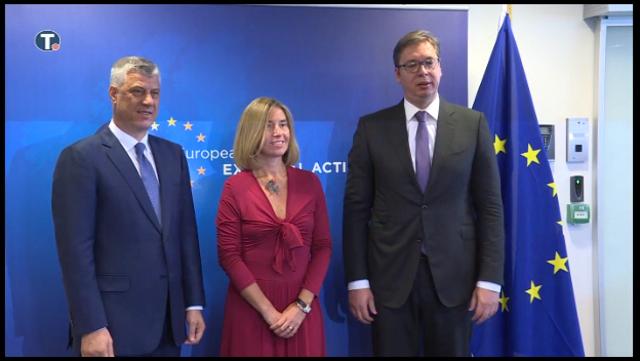 According to the EU, Vucic and Thaci agreed "work on starting a new phase of the dialogue between Belgrade and Pristina for normalization of relations and reconciliation."

The presidents "decided that the respective teams will start working on preparations," said a press release issued after the meeting.

They also "stressed the importance of the implementation of the agreements reached in the dialogue without delay," while Mogherini "confirmed the commitment of the EU for the European perspective of the whole Western Balkans."

Speaking after the meeting, Vucic said that it would take a month and a half to prepare for the continuation of the dialogue.

He did not rule out the possibility that the dialogue could continue at the presidential level, and added that it was "necessary to talk about future relations more seriously and bravely."

Vucic said that agreement was reached to continue the dialogue and implement the already reached agreements.

"The establishment of the Community of Serb Municipalities (ZSO) is implied, there are no further negotiations there," Vucic told reporters.

Vucic said he asked Mogherini for "Serbia's accelerated accession to the European Union."

According to him, this was the first time that he asked for this "in such a way, explicitly."

"I think we received Mogherini's understanding, for knowing exactly when we may become a member, so that we don't act like geese in the fog, who will surely find the right way, but don't know when it ends," he told reporters, and added that his visit to European Council President, that will happen "around July 14" will be "important for that reason."

Ahead of the meeting, the EU foreign policy chief said it would see Vucic and Thaci "exchange opinions on the continuation of the dialog, and the normalization of relations between Kosovo and Serbia, as well as overall developments in the Western Balkans."

The last meeting within the Belgrade-Pristina dialogue, either at political or technical level, was held in Brussels in early February.