Prime Minister and President-elect Aleksandar Vucic says that Serbian citizens should not be concerned about Ramush Haradinaj's statements. 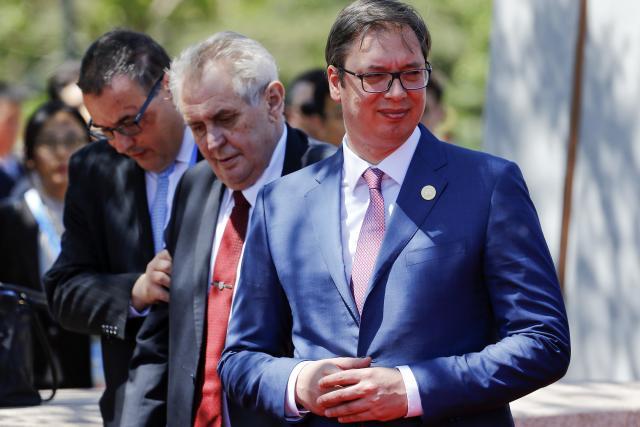 According to Vucic, who is currently in Beijing, no such thing as a Greater Albania will exist.

In addition, he said that Haradinaj's statements - like the latest urging Washington to "solve things between Belgrade and Pristina if Brussels can't do it" - are all "part of a concerted policy whose protege is Haradinaj."

When asked by reporters to comment on that statement, Vucic said he "does not see it as coming from one of the leaders on the political scene in Pristina."

"I would say that this is a concerted policy of everyone, it's just that they found a 'protege', Haradinaj, the one who is supposed to say it," Vucic said.

He added that "obviously there are certain ideas and plans and a covert agreement with a part of the international community."

"I understand their anxiety, why they must repeat it every day, I understand also that they are in a hurry, but citizens of Serbia should not worry, they will not create any kind of a Greater Albania. And I can't threaten them, and have no intention to," Vucic said.

"I have never underestimated Albanians, it is a serious nation that we have to respect. But - them conquering Serbs, conquering Serbia, humiliating Serbia, destroying Serbia - no one will see that movie, including them," said Vucic.

Previously, Haradinaj said that Serbia should "delete" Kosovo from its Constitution or have a third of its territory "added to Kosovo."

These have not been the only recent statements about the creation of "a Greater Albania." Albanian Prime Minister Edi Rama would not rule out "a union" between Albania and Kosovo if chances of Western Balkan countries joining the EU faded.

Bujanovac Mayor and President of the Albanian National Council based in Bujanovac Jonuz Musliu then said that Tirana has his full support to "unify" Albania and Kosovo - but that a Greater Albania cannot be complete without Presevo and Nis, two towns in central Serbia.

Kosovo President Hashim Thaci told Radio Free Europe that if the EU shuts its door to Kosovo, "all Albanians in the region will live in one unified state in order to proceed with integration into the European family."