The whole world now has the evidence served on a platter than William Walker is a Greater Albania lobbyist, Aleksandar Vucic has said. 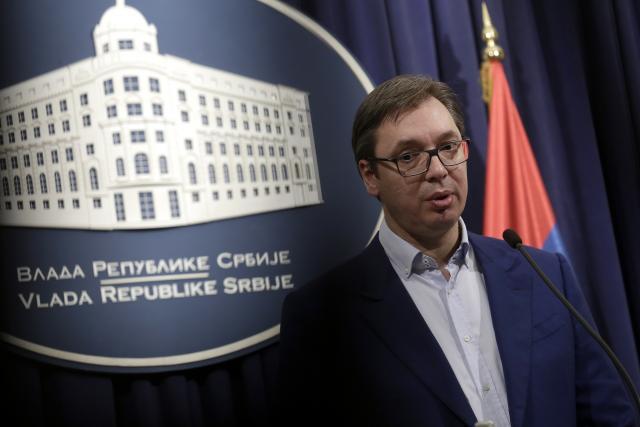 The Serbian prime minister and president-elect in this way reacted to the announcement of the former head of the OSCE verification mission in Kosovo that he was working on "a project of unification of Albanians."

"Put to one side that he has collaborated with Albania, to the side that he was engaged by US intelligence agencies. Is it possible that you, who told us you were neutral and unbiased, now stand for the Greater Albania? And you say you have a solution! Are you threatening us again? Do not be threatening us any longer," Vucic said in a statement for Sputnik, and added:

"Serbia will in every place and at every level present this as the ultimate proof that Walker's goal was never to protect human rights in Kosovo but to fight against Serbia and (for) the creation of the 'Greater Albania'."

This is an important piece of news that should be given attention beyond the everyday level, he continued.

"We will yet talk about this Walker's message. And we'll do it at all levels, in Europe and in the world. William Walker did not say something just like that. He said that he has a project, that he has a plan for unification of Albania, Kosovo and the so-called Albanian diaspora. So, de facto, has a plan to create the 'Greater Albania'," Vucic said.

He went on to explain why Walker's message, that came after many days of "Greater Albania" talk, was "important news."

"It seems to me that we have not been paying enough attention until now to these messages, but we will pay attention. William Walker was someone who represented an 'independent and objective mission' of the OSCE, or at least that's what they persuaded us."

In the context of Walker's activities, Vucic recalled that the "Racak case" was a fabrication used as the reason to start "a big conflict."

"That was the reason, it was a pretext for war. It all started with William Walker's lies. This is a man who now openly shows that he is in fact a Greater Albania lobbyist. This is the same man because of whom (NATO) carried out an aggression against the Republic of Serbia. This is the same man. This is a man who now stands for the 'Greater Albania' and says so openly. He is no longer even hiding it," Vucic said.

He then pointed out that former Finnish President and UN envoy for Kosovo Martti Ahtisaari was also "brought in as an international mediator who is supposed to be independent, who was supposed to offer an objective plan for resolving the problems between Serbs and Albanians - and now he's on Pristina's Albanian team."

"This tells us that from the beginning, everything was directed not against (President) Slobodan Milosevic, or certainly, not only against him, but primarily against Serbia," Vucic said.

"Now, we have the key evidence for this. Now this is no longer our media's reports. Now this is not a question of whether some of us are thinking it. They have offered this evidence themselves, provided it to the world on a platter," he added.

"Well - does all this mean that in future we should once again trust some supposedly objective international organizations, whose representatives will, in the most direct and blatant way advocate for the Greater Albania?," Vucic asked, and reminded that "their statements were the casus belli for the most direct attack on the Republic of Serbia."

The prime minister and Serbia's president-elect does not think that his country will soon be able to "turn things back" and "make America and 23 EU countries withdraw their recognition of Kosovo" - but he thinks that "a great diplomatic struggle continues."

"We will fight. They are all still together. Much stronger than we. I am proud of the fact that now everyone in the world is clear on who has the morals on their side. Don't forget, there is nothing more important than that. I am convinced that a good number of people will start to understand what happened. To at least have that for the future. To at least always be able to say how and in what way, and for what, our country came under attack," Vucic concluded.