Vucic responds to Haradinaj's threats: "I know who you are"

Prime Minister and President-elect Aleksandar Vucic on Wednesday reacted to Ramush Haradinaj's latest threats to say that he "knows very well who Haradinaj is." 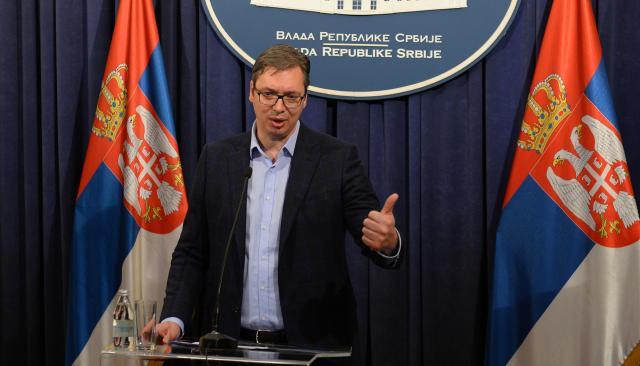 The Kosovo Albanian politician and former KLA leader, wanted by Belgrade on war crimes charges, earlier advised Vucic not to "mess" with him or "play with Albanians."

"They are attacking us because they see greater strength, energy and power of the Serbian state, and that should not have been allowed. The purpose of these words of Haradinaj's obvious threats, personal and political, is for Serbia not to be strong. If the threat is, 'take care', 'something will happen to you'... I know well who you are, I saw what happened to those who testified (against Haradinaj), they got run over in Podgorica, they hanged themselves from ambush," Vucic said.

The prime minister said he was "not thrilled by the desire to make him keep quiet and participate in the hiding of crimes."

Vucic said he was not concerned about "dangerous people" such as Ramush Haradinaj, but about Europe's silence in the face of recent messages from Albanians, which he said could only be understood as threats to redraw borders and cause destruction in the Balkans.

"It seems everyone is allowed to say whatever they like, to lie, like the lie uttered in Brussels today that we have some military base near Nis, and all these lies are accompanied by a wide, but not numerous movement in Serbia of those who only care about coming to power, keeping their bosses and those giving them orders satisfied," he said.

"I am not playing with Albanians - on the contrary, I have been offering them my hand," Vucic said, but added that he "will not" do this when it comes to criminals and rapists.