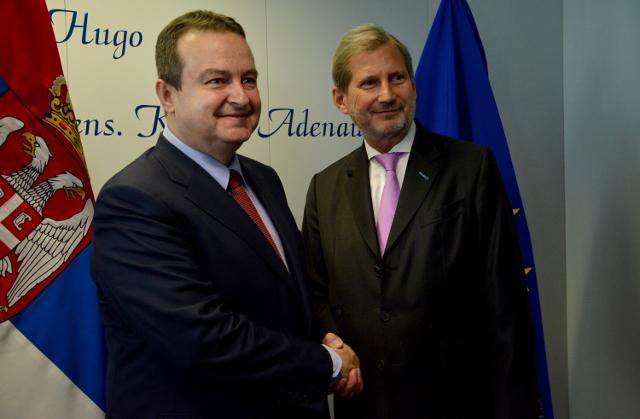 According to the Serbian government, Dacic, who also serves as first deputy PM, said after the meeting that the goal of Serbia and the Western Balkans is to enter the EU, adding that this goal can only be achieved by making big steps forward, and not by inflammatory statements that return the region to the past.

He "expressed the expectation that several negotiating chapters will be opened at the end of June, at the next EU-Serbia Intergovernmental Conference."

"We hope there will be four of them. However, regardless of their number, it will mean that there is the dynamics and continuity in the process of progress on the path of European integration," Dacic said.

He reiterated that one of the foreign policy priorities is regional stability, and that Serbia will make utmost efforts to provide its constructive role with a significant boost to the Balkans being a region of regional stability and peace.

"We have noted today that Serbia is on the right track and it is necessary to compensate for what we have lost in the past, and therefore we need bigger steps," Dacic said.

He "expressed hope that the road to the EU will not be stopped, and stressed that Serbia will do everything to contribute to the continuation of dialogue with Pristina, but also that we expect the Community of Serb Municipalities to be established."

Dacic told Hahn that Serbia will continue with its foreign policy priorities, including the EU membership, following the election of the new president and the formation of the new government.

After meeting with Dacic, Hahn stressed that Serbia is on the right track and that he expects new chapters in the accession negotiations to open soon, the government said on its website.

"We are confident that the new negotiating chapters will be soon open. Every opportunity must be exploited to keep pace and dynamics of this process," he said, and "praised Serbia for leadership in the area of regional cooperation and good neighborly relations."

The EU commissioner also "dismissed as unacceptable and counterproductive statements by some Western Balkan leaders, implying the change of borders," Beta reported.

"I am using this opportunity to express my disappointment and, if I may say, anger over inflammatory statements by some regional leaders. Those statements, which may be interpreted as interference with neighboring states, and implying a border change, are unacceptable and more than unnecessary and counterproductive," Hahn said, and "appealed to everyone to refrain from similar rhetoric."

"We share the view that there should not be unnecessary delays in the accession process, which means that the EU needs to deliver when Serbia meets the requirements, leaving bilateral relations aside," he said.

"This also means that Serbia has to do its part of the job, because the pace of the negotiations depends on the implementation of reforms, especially in the rule of law and the economy," Hahn said, adding that Serbia's EU accession talks also depended "on the progress made in the dialogue with Pristina," and hoping that "both sides will demonstrate a constructive approach, and achieve additional tangible results," and that new chapters would be opened soon.