Pristina and Tirana have clearly stated that their goal is a Greater Albania - and that can only be done through a great Balkan war, says Aleksandar Vulin. 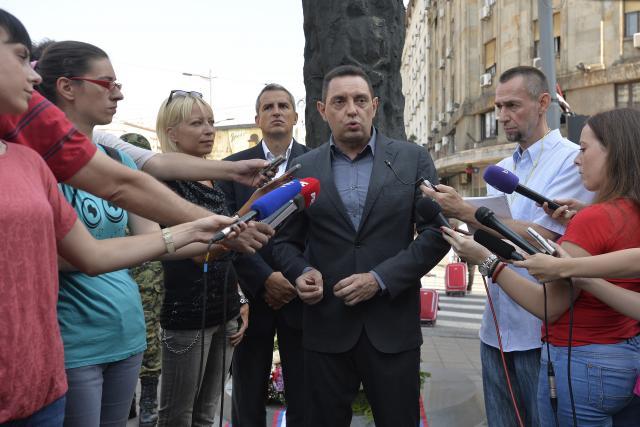 According to this Serbian cabinet minister, "Brussels must be clear on all this."

"Pristina and Tirana have clearly said what their goal is, it is a 'Greater Albania' and unification of all Albanians, regardless of where they live, into a single ethnic area. That can only be accomplished through a great Balkan war, and Brussels (EU) must be clear on all this," Vulin said, adding that if the EU is "unable to at least condemn it, let it be known that such behavior will be punished - then all responsibility for the future events lies with it."

"You know, when you get such mild reactions from Brussels, that almost express an understanding for Edi Rama's anger and the threat of a Balkan war, then you can expect Thaci to speak too, since he can see that such behavior goes unpunished. You can expect him to speak too, and also announce the possibility of a war," Vulin said.

Commenting on Thaci's statement that "all Albanians in the region will live in one state if the EU closes the door on Kosovo," the minister stressed that Thaci, who now serves as Kosovo's president, "came to be" as a terrorist, in a war - "so one cannot expect him to understand anything else."

Vulin reiterated that the EU would be responsible for any future conflict.

"The responsibility is no longer either on Albania or on Pristina, since we know they have always dreamed of a 'Greater Albania' and always will dream about it, and will do anything to make it happen unless they are stopped, unless they are punished before they try. Both Pristina and Tirana have stated their goal clearly. Their goal is a 'Greater Albania' and unification of all Albanians no matter where they live into a single ethnic space. The responsibility is now on Brussels."

Albanian Prime Minister Edi Rama said earlier this week that he could not rule out the possibility of a "union" between Kosovo and Albania - a sentiment Thaci later echoed.