A new protest was held in Belgrade on Monday evening by citizens dissatisfied with the outcome of the April 2 presidential election in Serbia. 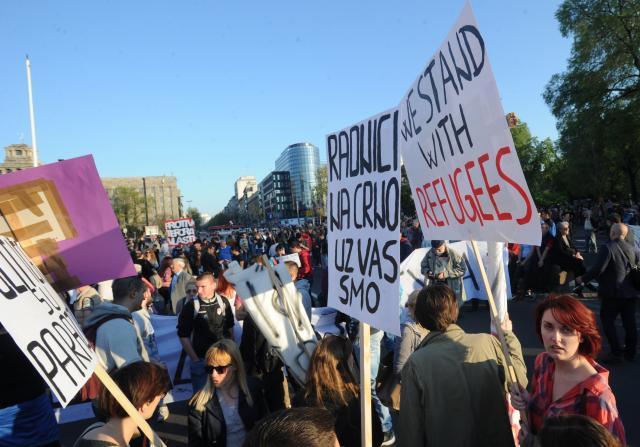 Serbian PM Aleksandar Vucic won the vote in the first round.

The protesters gathered for the eight time and marched from the National Assembly, past several media outlets - where they made short stops and expressed their dissatisfaction, including state broadcaster RTS, tabloid Informer, and Studio B broadcaster - as well as past the Serbian government and the Electoral Commission (RIK).

They carried banners with anti-government messages and those demanding fair and free elections and freedom of the media.

Several thousand people also gathered in Novi Sad and Nis each, while smaller rallies were held in several other towns.

Participants in these protests announced on Monday that they had harmonized their demands, which have now become "the official demands of the protest."

Beta is reporting that students who have been organizing protests announced that they have called for the dismissal of the entire political elite, headed by Aleksandar Vucic, fair and free elections and ending the dictatorship.

They further called for an independent review of the regularity of the recent presidential election and the criminal accountability of all those responsible for the irregular election campaign and irregularities during the voting and vote counting, freedom of the media, the dismissal of editors of public broadcasters RTS and RTV, as well as severe penalties for all editors of the media outlets who violate the media laws and the code of ethics of Serbian journalists.

They also called for the immediate dismissal of all party and corrupt officials in public companies, the change of priorities in economic and social policies, protection of the rights and improved status of all workers, changes to the Labor Law to immediately provide for improving the position of the workers, securing their rights, as well as an immediate increase in the minimum wage.

The students called for a proactive struggle for the protection of black market workers, seasonal workers and temporarily hired workers, and other workers subject to severe types of exploitation, and education and health care services fully funded by the state and accessible to all.

“We, the students, together with workers, pupils, farmers, pensioners, and all other discontented people in Serbia, who have been protesting for days now, wish to present our demands and call on all those who agree with us to join the struggle for achieving these demands," the students said.