Belgraders who say they are dissatisfied with the outcome of the presidential elections held another protest on Sunday evening. 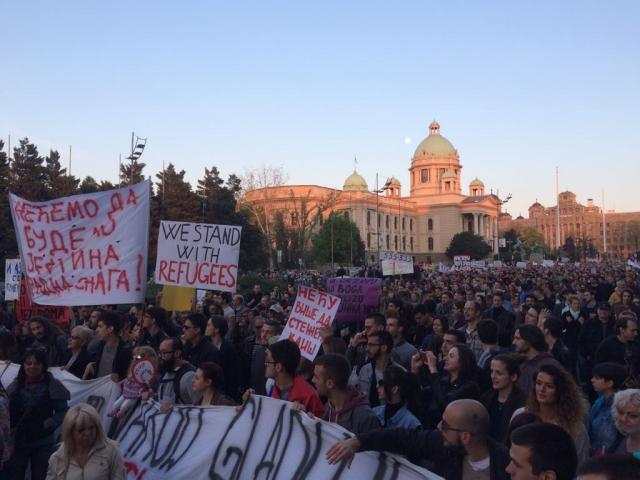 They gathered for the seventh time, and marched through central Belgrade, carrying banners and chanting slogans against president-elect Aleksandar Vucic.

"The Protest Against Dictatorship," as these gatherings have been dubbed by their still unknown organizers, could continue on Monday with a rally in front of the seat of the Presidency of Serbia - judging one one of the banners displayed on Sunday.

Actor Sergej Trifunovic was among those who joined the protesters, whose march also took them past the state broadcaster RTS, and the Serbian government.

Earlier, the protesters announced that they wanted members of the Electoral Commission (RIK) members, the Regulatory Body for Electronic Media, RTS editors, and President of the National Assembly Maja Gojkovic all sacked. The sorting of voter rolls to establish the exact number of voters is another demand.

Interior Minister Nebojsa Stefanovic commented on Sunday to say that "a minimal number of police officers" was deployed in the streets because the protests are "expected to be peaceful and non-violent."

On Saturday in Belgrade, members of army and police trade unions, who are dissatisfied with "poor living standards in the security sector," also gathered in Belgrade, Beta reported. They were joined by the youths and students who are protesting for a week now.

The police said the rally brought together 10,000 people while reporters have put the number at at least 15,000, the agency said, noting that it passed without incident.

A statement posted on the "Protest Against Dictatorship" Facebook page on Monday said that while "everyone has the right to support the protests" - the organizers were "distancing themselves from the influence of political parties."

They also asked for the statement to be read on RTS and for the government to "take a stance and act in accordance with the demands (presented by protesters) by April 17."

The demands also include "simplifying the voting procedure in the diaspora," and, "annulment of fake doctoral degrees of high ranking officials Nebojsa Stefanovic and Sinisa Mali."

The statement said that the protests emerged "spontaneously, as a way to let the dissatisfaction of citizens heard."