Protests were held on Wednesday evening in several cities and towns in Serbia for the third day in a row. 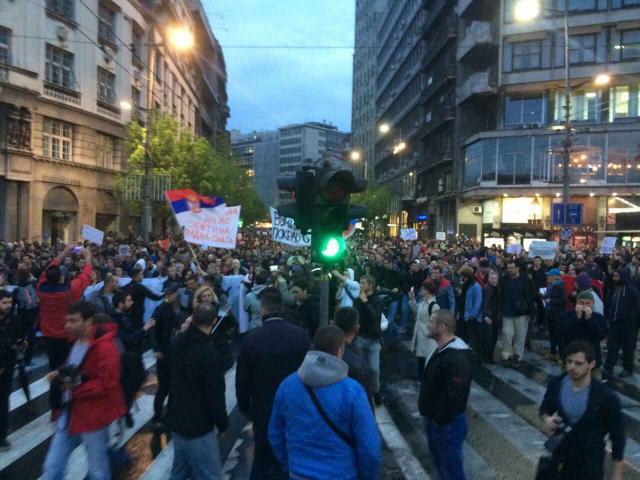 Those gathered are dissatisfied with the results of the April 2 presidential elections, that saw Aleksandar Vucic win convincingly in the first round.

The protesters, mostly students and young people, organized via social networks. The organizers are still unknown, while nobody has officially addressed the rallies so far.

In Belgrade, they gathered in front of the National Assembly and then marched to the government HQ. Before leaving the area in front of the Assembly, a group of people started repairing a fence displaying the names and the photographs of the Serb victims from Kosovo, which was damaged on the first day of the protest.

The protesters carried banners reading, "Down with dictatorship" and, "We don't want to be cheap labor." The protest ended without incidents after about four hours, with new rallies scheduled to take place on Friday and Saturday.

Beta is reporting that the protest in Novi Sad gathered around 1,000 people, who sought "a fair and free election and the stepping down of the entire cabinet, which they accused of trying to stage incidents."

At the beginning of the rally, participants asked for the Electoral Commission (RIK) members to be sacked for "failing to follow the rulings of the Constitutional Court", and members of the Electronic Media Regulatory Body for "failing to respond to hundreds of reports."

The protesters also called for the removal of Serbian National Assembly President Speaker Maja Gojkovic for the "pre-election obstruction of parliament, which cut off information to citizens and silenced the opposition." They added that they demanded a change in the management of the state broadcaster RTS for "regime-inclined reporting and unequal air time for the candidates."

Protesters called on the representatives of the military and police unions, and the workers of Gosa and other companies, to join them, announcing that they would join in their protests too. They accused the authorities in Novi Sad of trying to stage "various incidents," claiming that they had "tips" about these attempts.

Those who gathered in Belgrade said they supported these demands.

2,000 more people protested in Nis on Wednesday evening, while several hundred gathered in Krusevac, Cacak, and Bor. The rally in Novi Pazar was called off due to low turnout.