President-elect Vucic to remain PM for another two months

Serbian PM Aleksandar Vucic, who was on Sunday elected as the country's new president, will continue at the helm of the government for about two more months. 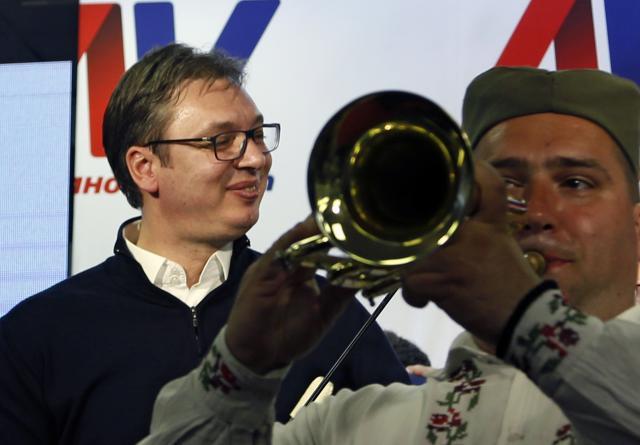 The mandate of the current president, Tomislav Nikolic, expires on May 31, when he will hand over the reigns to his long-time party comrade. After this, Vucic will take the oath of office, have his inauguration - and hold consultations with representatives of parliamentary parties on Serbia's next prime minister and new government.

Vucic will officially become president when he takes the following oath in front of the National Assembly in Belgrade:

This will mark the beginning of his 5-year term in office, and will be followed by the presidential inauguration, which in the case of Nikolic took place about ten days after the oath-taking ceremony.

Until Vucic's inauguration, the Serbian public will likely be focused on who the new prime minister will be. According to unofficial reports, Finance Minister Dusan Vujovic is a favorite.

It also remains to be seen what will happen to Nikolic: where his political career will go from here, and what his status within the ruling SNS, a party he co-founded with Vucic, will be. When Nikolic became president in 2012, he stepped down as party leader; Vucic could now remain at the party's helm, "give it back" to Nikolic - or to another associate.

Vucic will be only the fourth president of Serbia, considering that this office was introduced with the 1990 Constitution. A monarchy while an independent state, and while a part of the Kingdom of Yugoslavia after 1918, Serbia has had "the president of the Presidency" prior to 1990, as part of the post-WW2 communist Yugoslavia.

The country's first president was Slobodan Milosevic, who stayed in office until July 1997, when Milan Milutinovic took over, serving in the role until 2002. A failed election followed, and the start of the "acting" period - when Assembly heads Natasa Micic, Dragan Marsicanin, Vojislav Mihailovic and Predrag Markovic all served as acting presidents.

Vojislav Mihailovic's presidency is noteworthy for lasting only one day.

The third elected president of Serbia was Boris Tadic, who came to power in 2004 and stayed there until 2012, when he "shortened his own mandate," called early elections, and lost them to Tomislav Nikolic in the run-off.

According to the Constitution, the president of Serbia represents the country at home and abroad; promulgates laws upon his decree, in accordance with the Constitution; proposes to the National Assembly a candidate for the prime minister, after considering views of representatives of elected lists of candidates; proposes to the National Assembly holders of positions, in accordance with the Constitution and Law; appoints and dismisses, upon his/her decree, ambassadors of the Republic of Serbia, upon the proposal of the government; receives letters of credit and revocable letters of credit of foreign diplomatic representatives; grants amnesties and award honors; administers other affairs stipulated by the Constitution.

In accordance with the Law, the president "shall command the Army and appoint, promote and relieve officers of the Army of Serbia."