Russian President Vladimir Putin had "two additional questions" for Serbian PM Aleksandar Vucic after their meeting in the Kremlin on Monday. 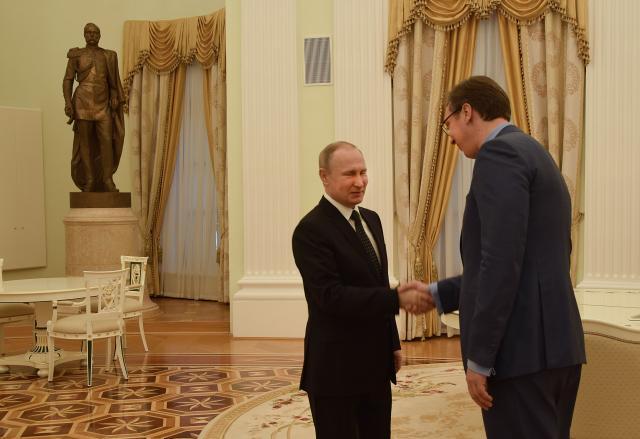 And these concerned "politics," Vucic revealed.

The prime minister went before reporters after the meeting - but was summoned back to Putin's cabinet for what he said were "a couple more questions."

"Putin had two more questions for me, but I can't talk about what. These two questions were of a political nature," Vucic said.

When reporters asked whether the questions concerned Serbia's upcoming presidential elections - where Vucic is the ruling coalition's candidate - he replied negatively.

"No, President Putin unequivocally said everything regarding the elections in his introductory address, while this concerned the future policy, what and how we should do in the future," said Vucic.

At the start of their meeting, Putin remarked that regardless of the outcome of the election - "no matter how the political situation develops" - Russia was "sure that our bilateral relations will continue to develop just as positively, in the spirit of friendship that has characterized our ties over these last years."

After the meeting, Vucic said it was "only a question of weeks" before the six Russian MiG-29s would arrive in Serbia and that he expects Putin to soon sign a decree to that effect.

According to him, the only issue that remains is technical - whether the planes will be dissembled and transported, or fly over third countries on their way here.

Vucic said he was "pleased to hear from Putin that he personally approved everything in the domain of the military-technical cooperation, that was previously agreed on with Russian officials, and concerning to 30 armored vehicles, 30 T-72 tanks, and six MiG-29s."

Asked whether the overhaul of the warplanes would be done in Russia or in Serbia, Vucic said that "the Serbian center for overhaul and repair of helicopters" was "also mentioned" - and that this topic was launched by the Russian president.

The prime minister then said that "the modernization of some of the MiGs will be probably done in Serbia - for which we must prepare - while the rest will be done in Russia."

This way, "a number of planes" will soon arrive in Serbia, he continued, followed by those that will be overhauled in Russia.

Vucic pushed back on critics to say the MiGs were "not rust buckets" but rather "best in the world in close-quarters combat, top-notch planes" - while their modernization concerned radar systems, and air-to-air and air-to-surface missiles.

"These are the things we need," he said.

Vucic also mentioned the cooperation with Russian firms that Serbia has via the defense industry company SDPR, specifically concerning 155-millimeter howitzers, and noted that he "presented our ideas related to the combat vehicle Milos."

Russia makes a lot of money from manufacturing and exporting arms, Vucic observed, and asserted that this was "the most important branch of the economy in that country."

"Therefore, we too want to make more money, and obviously, the demand for this is growing in the world," the prime minister concluded.

Previously, the Serbian PM's team and the Russian president's cabinet said that the topics on the agenda included the economy, military-technical cooperation, but also the "escalation" of the situation in the region and Serbian politics.

A statement issued by the Kremlin said that Putin and Vucic "considered the development of Russian-Serbian relations, above all increasing trade and investment cooperation between the two countries."

They also spoke about "current international and regional problems, the brief statement said.

According to the remarks published on the kremlin.ru website, Vucic thanked Putin for "the warm reception and hospitality," and added:

"I want to say that we need to thank you personally and the Russian Federation for supporting the Republic of Serbia’s territorial integrity and sovereignty. As you said, I hope and am sure that we will have plenty of opportunities to increase our bilateral trade and economic ties."

"We will discuss the situation in the region. I think that this is important for both countries. It is very important that, as you know, we remain committed to our national independence, freedom and military neutrality. We will discuss together all of this and examine the steps we need to take for the future," Vucic said, addressing Putin in Russian.