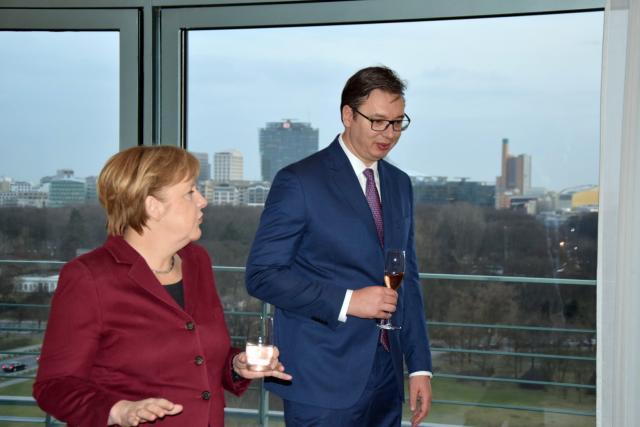 Vucic told Serbia's state broadcaster RTS after the meeting that Merkel was "very concerned with the events in the region of the Western Balkans," Beta reported.

"She is concerned about the events in the region. She does not know all of the details, her associates do, but she sees the big picture and recognizes the gist. She is one of the rare European leaders who are deeply worried," he said.

According to Vucic they discussed bilateral relations, attracting investors, regional stability, stressing that the German chancellor was "very pleased" with Serbia's economic stability.

Vucic said that Serbia's European path depended on Germany, that our country had a lot to learn from looking at the example of Germany and their "winners' mentality."

"Germany is today becoming one of Serbia's key partners," Vucic said, adding that the Germans had a much better understanding of the reforms that the Serbian cabinet had undertaken.

According to him, the number of persons in Serbia employed with German companies is growing daily.

Asked whether Merkel had any messages ahead of this week's summit of Western Balkans prime ministers in Sarajevo he said she told him "exactly what to say to (EU Commissioner) Johannes Hahn."

"I said - don't worry, I'll convey it," said Vucic, and added that the message "concern the development of certain projects with Bosnia, Macedonia, and Albania."

Speaking at a joint news conference with Merkel earlier in the day, Vucic said that Serbia was "investing a lot of effort in preservation of regional peace and stability" and that "the situation in some countries of the Western Balkans was turbulent" - while he was "confident that peace and stability can be preserved with the help of the EU and Germany."

According to the Serbian government, he said that "the entire Western Balkan region is seen as the place of future significant growth, while Serbia is on the right track when it comes to the economy."

"We respect the fact that Merkel appreciates our effort and our work, but also the message that we have to do much more. The German chancellor is right when she talks about it, especially when it comes to the rule of law and efficiency of the judicial system, and we expect a lot of support and assistance of Germany and the European Union," he said, and "expressed his gratitude to Merkel for always having understanding for Serbia."

Merkel said that Serbia and Germany are "friendly countries" and "recalled that 400,000 Serbs live in Germany and that this Germany is an important trade partner of Serbia, with a trade volume of about EUR 4 billion and investments in the amount of EUR 1.3 billion."

She said that today 370 companies with German participation in Serbia employ 25,000 Serbian citizens.

The German chancellor pointed out that the reform process in Serbia is going forward and meets EU standards, as confirmed by the chapters that were opened in February.

"We wish that the cooperation continues to develop, and so the fact that Prime Minister Vucic undertook significant reforms in recent years is therefore important. There is an obvious great effort to create a more conducive climate for international investment and thus fulfill the conditions for negotiations," said Merkel.

"This is a big success," she said, and told Vucic "to continue reforms pertaining to the rule of law."

Belgrade-based daily Blic is reporting, citing unnamed sources that attended the meeting in Berlin, that Merkel told Vucic she asked US President Donald Trump for his country and the EU "to become more involved in the goings-on in the Western Balkans."

"Merkel said she was concerned over the constant tension around Kosovo, Bosnia-Herzegovina, the events in Croatia. Germany cares about peace in the Balkans and she expressed her desire to seriously participate in the processes of reconciliation. Merkel asked Vucic to be the guarantor of peace and stability in the Balkans," the source has been quoted as saying.

Merkel also "expresses her desire for Serbia to enter more actively the realization of the Nis-Pristina highway project."

She expects EU Commissioner Johannes Hahn to "agree that" with regional prime ministers in Sarajevo on Thursday within the Berlin Process.

Should things fail to develop according to Merkel's ideas, she will become personally involved in the process ahead of a summit in Trieste, to be held in the summer, the report said.

RTS reported on Tuesday that Vucic's meeting with Merkel was was previously scheduled for Friday.

Due to a storm that hit the northeastern parts of the US, Merkel's trip to that country, where she was to meet with President Donald Trump, was canceled on Monday.

Vucic, meanwhile, confirmed he would meet with Merkel on Tuesday, and that they would make "joint statements" and have a working dinner.

The prime minister said he and the German chancellor would discuss "all important regional topics," and "our economic progress, as well as the further arrival of German investors to Serbia."

"This will be the tenth time I am meeting with Merkel and that is a great honor for our country," said Vucic.

According to him, Merkel is "the greatest leader in Europe and de facto the leader of the EU" whose support to Serbia for making progress on the EU road and for the arrival of German investors would be "exceptionally important."