Albanian President Bujar Nishani arrived in Bujanovac shortly after noon on Tuesday, marking the start of his one-day visit to Bujanovac and Presevo. 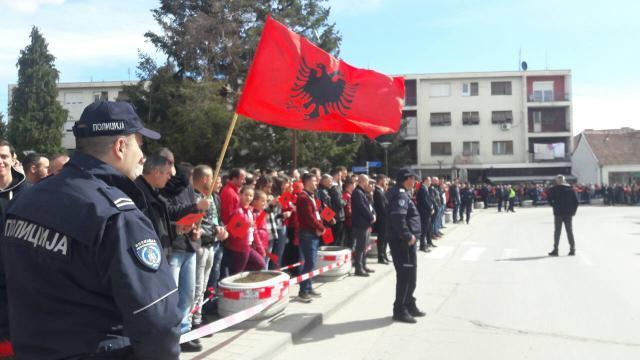 The Albanian anthem was sounded on that occasion.

A ceremonial welcome was organized for Nishani in front of the municipal building, with members of a local folklore ensemble wearing Albanian national costumes.

According to estimates, more than 1,000 citizens were in front of the municipal building today, greeting Nishani by waving Albanian flags.

According to the protocol, the president of Albania will speak with local ethnic Albanian political leaders in the cabinet of the mayor of Bujanovac, and then visit the Muharem Kadriu elementary in Veliki Trnovac.

He will then travel to Presevo, where he is expected to address citizens in this town in the local House of Culture.

Increased police security was not visible in the streets of Bujanovac today ,said Tanjug, "but it is assumed that security measures have been increased by deploying plainclothes officers."

Asked to comment on Bujar Nishani's visit, Serbian Prime Minister Aleksandar Vucic said that "nobody will be allowed to dream any dreams at the expense of our territory and our nation's vital interests."

"We're not scared by anything, we're an open country, everyone is welcome, but those who think they can or dare undermine the country's integrity - my answer is, don't do it, and don't even try it," he said, adding:

"I think we've acted in a wise and rational way. The Albanian president has been greeted like any guest."

Vucic said that head of the Coordinating Body for Southern Serbia Zoran Stankovic was also "there" today, but remarked that it was "not nice" that the Serbian anthem was not sounded during the welcoming ceremony.

He said that Stankovic "knows the protocols of the state of Serbia," and then told "all those who dream some other dreams, rather than new factories - which are our dreams" to "forget about them."

"Don't even try that - and I wish they have a good time," said Vucic.