Serbian and Bosnian Serb leaders have agreed to maintain "daily communication" after the announcement of a revision of Bosnia's genocide lawsuit against Serbia. 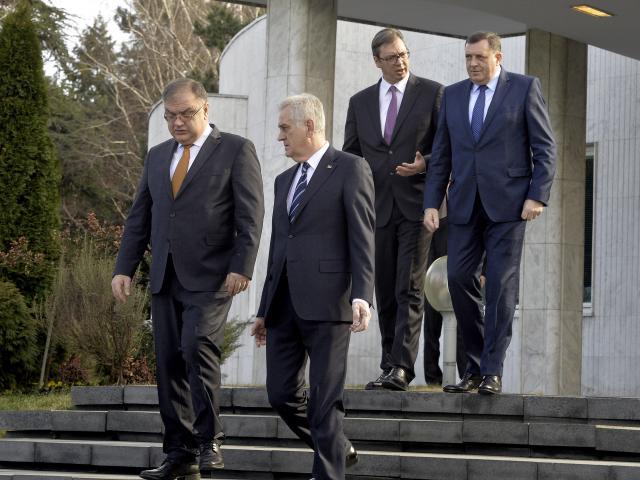 The meeting between Serbian President Tomislav Nikolic, Serbian PM Aleksandar Vucic, Chairman of the Presidency of Bosnia-Herzegovina and Serb representative in the tripartite body Mladen Ivanic, and Serb Republic (RS) President Milorad Dodik was held in Belgrade on Wednesday and lasted an hour.

The four officials concluded that "relations with Bosnia-Herzegovina" will be disturbed by the development, Beta has reported.

"It is uncertain how relations in Bosnia-Herzegovina will develop, and what relations they expect to have with Serbia," Nikolic said after the meeting.

Vucic believes that "this is a big step backwards, setting relations back 25 years."

As he said, "the painstakingly built trust is being undermined, while Serbia had no part in the decision to once again talk about the lawsuit."

"We cannot speak about building a great trust, but about what is a vital interest of Serbia, the RS, and I believe, also of Bosnia-Herzegovina," he said, adding:

"Our job is to preserve peace, to respond to their complaint, to win - even though there is no real winner. It's our job to make sure the lawsuit fails, as it will."

According to the prime minister, "new mechanisms will have to be found to establish relations with the Bosniak (Bosnian Muslim) people."

Both Nikolic and Vucic think that the international community's hypocrisy is evident in this case.

Nikolic said that the international community "for now has no words to justify such a move, but also no words of condemnation," and would have to eventually say whether this is being done with its consent.

"Serbia will always stand with the Serbs in Bosnia-Herzegovina, we are an inextricably linked nation, one and the same people. They in the RS will have the support in everything they do that is based on the Constitution and the law," said Nikolic.

Vucic said that he expected "Europe to have the same standard at least one time."

"We realized that nothing can ever be solved when it comes to the Serbs. And our message is that we will never endanger any citizen in Bosnia-Herzegovina, this goes for everyone, Bosniaks, Croats, everyone," said Vucic.