President Nikolic will be a candidate in the presidential elections, broadcasters Sputnik and N1 are reporting on Thursday. 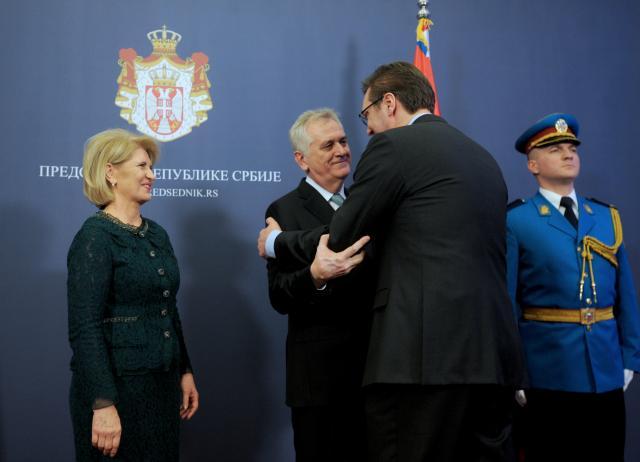 B92 has also unofficially received confirmation of this news from Nikolic's cabinet.

According to media reports, the president made the decision on Wednesday evening, as he celebrated his 65th birthday.

Earlier, Tanjug was told by sources from Nikolic's cabinet that they could "neither confirm nor deny" that the president would launch a reelection bid.

But as of Thursday afternoon, neither Nikolic nor his associates had officially confirmed this.

His adviser Stanislava Pak-Stankovic told reporters that the president "expects to reach an agreement with Vucic, that will be in the interest of Serbia."

Local media in Belgrade are saying that Nikolic has sent a letter to Vucic. Prva TV reported it learned that Vucic "did not reply."

As the news was published late last night, Nikolic posted a tweet with the following message - a quote from his address delivered at the Statehood Day reception: "No retreat, no withdrawal" - along with photographs, including one where he is seen with Prime Minister and SNS leader Aleksadar Vucic.

Beside Vucic and the head of the provincial government in Vojvodina, Igor Mirovic, no other government member attended the reception.

When Tanjug asked about Nikolic's reported reelection bid on Thursday, Vucic "kept silent and made no comment."

But First Deputy PM and Foreign Minister Ivica Dacic said that if the news was true, it was "disgraceful."

Dacic's party has moved to support Vucic as the ruling coalition's presidential candidate.

On Tuesday, the presidency ruling SNS - a party Nikolic led until he was elected Serbia's president, and which he and Vucic co-founded - decided to nominate Vucic as its candidate in the upcoming presidential elections. This decision should be confirmed and become official on Friday.

Earlier on Wednesday, Tomislav Nikolic said he was "not surprised" by yesterday's decision of the SNS Presidency to nominate Vucic as its presidential candidate.

When asked by a B92 reporter "what he and the SNS leader (Vucic) will discuss now," the president replied:

"As Aleksandar said yesterday, I always reply to your questions, but don't (ask) today."

Asked whether he has given up on his his reelection bid, the president said: "We'll make an agreement..."