Aleksandar Vucic will be nominated as the candidate of the ruling SNS party in this year's presidential elections in Serbia. 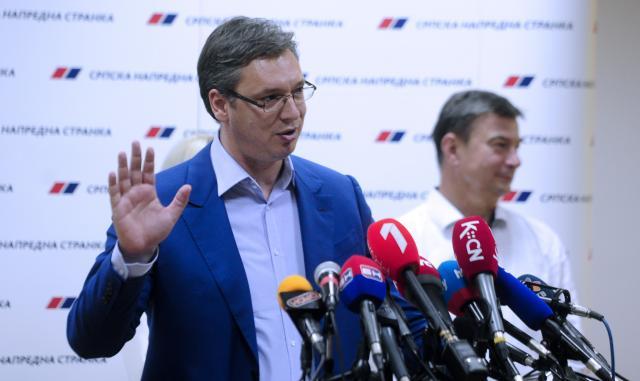 The party's presidency made the decision unanimously on Tuesday afternoon. It remains be confirmed by the SNS main committee on Friday.

The presidency's decision was confirmed today by Interior Minister Nebojsa Stefanovic, who spoke to reporters after the meeting.

Speaking later in the evening for state broadcaster RTS said that he accepted to be a candidate because "the issue of the winner in the presidential elections" was "of great interest for the future of Serbia."

He noted that the party would make its final decision on nominating him in Friday, and did not rule out the possibility of early parliamentary elections.

Asked "whom he sees as prime minister" once he leaves the helm of the cabinet, Vucic replied:

"I have no intention of talking about that."

But he did clarify he would continue as prime minister until the day the presidential elections are called.

Vucic praised Tomislav Nikolic - SNS leader until he was elected Serbia's president, and co-founder of the party, along with Vucic - for his "historic" role, and said he planned to "work with him."

Vucic also revealed that he does not intend to be a candidate when his party chooses its next leader.

Earlier on Tuesday, President Tomislav Nikolic said that citizens would learn this evening "or tomorrow" who will be the SNS candidate.

They will hear this from Vucic, the president explained.

"I think we have agreed on almost everything. Perhaps you will hear it this evening from Aleksandar. Not today, and I was not trying to avoid you," the president told reporters who asked whether he would run again.

"Of course Vucic can win, even more easily than I, but I can also win. I don't see it as a bad thing that someone thinks (Vucic is a better candidate), but they should not be presenting that unless it's the position of the party," said Nikolic.

Asked about the support of the SNS, Nikolic, who was visiting the University Library in Belgrade, said it was split evenly between those backing him and Vucic, while the one who becomes the party's candidate "will receive all of its votes."

"The Gallup poll was clear - both Aleksandar and I have a chance to win. We will decide what's best for Serbia. Don't expect some decision of ours to disturb relations in Serbia," the president said.

When asked whether it was possible he would "not cooperate with Vucic if Vucic becomes a candidate," Nikolic replied: "It is not."