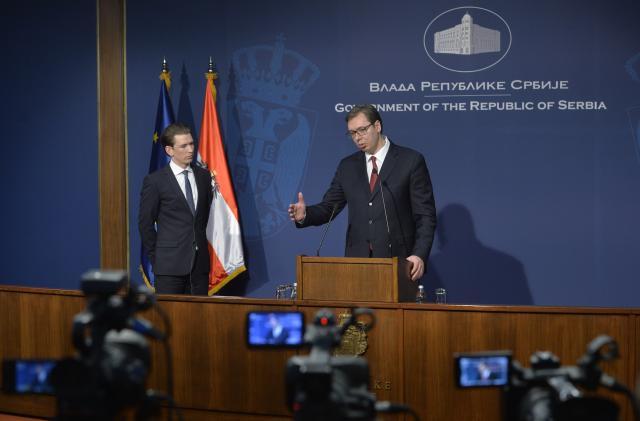 However, he underlined that the country, while accepting them, will do everything to keep itself from becoming a "parking lot" for refugees and illegal migrants.

He also thanked Austria for its support and assistance during the crisis.

"Serbia, unlike some other countries in the region that promised to receive five to ten thousand refugees, but have not received any, we have received everyone, noting that at this time almost all the refugees are staying in reception centers," he said.

There are also about 500 refugees who do not want to go there, but the problem is that some do not want to go because that is how they get to smugglers more easily, who then take them over Croatia to one of the EU countries, Vucic said, according to the government.

He added that in this respect he is pleased with the understanding and is grateful for the assistance of Austria, and primarily to the police who assist at border crossings.

Serbia is hosting some 6,600 refugees and migrants, most of them in the refugee centers, while some 500 live in the center of Belgrade, where they can make contact with smugglers, Beta quoted Vucic as saying.

Vucic said that 110 to 140 refugees come to Serbia every day, "which is not a serious inflow" and that 70 percent of refugees were coming via Bulgaria, and 30 percent via Macedonia.

In his remarks, Vucic also thanked Austria for "considerable support" to Serbia on its way to the EU, which he described as a national strategic goal.

Kurz pointed out that what was agreed in the dialogue between Belgrade and Pristina should also be implemented, and underlined that it is clear that all agreed should be applied.

Austria, which is also chair of the OSCE and an EU member state, contributes for the dialogue between Belgrade and Pristina to be successful, he said.

"When we think it is possible that we can influence, we do it on both sides, but the most important is that the dialogue is continued," he noted and expressed gratitude to all the politicians who lead the dialogue and support it.

There are strong economic, political and human ties between Serbia and Austria, Kurz said, commending the Serbian government's reform efforts.

He said he was pleased bilateral relations were not merely "full of history" but also had an eventful future.

Kurz said that Austria's companies, the largest investors in Serbia, "owed gratitude to the Serbian government for the reforms it has been implementing, and for economic growth." The Austrian official is confident that many of those companies "will expand their engagement and continue to invest in Serbia."

Kurz added that aside from political and economic cooperation, he had talked with Vucic about solutions to the refugee crisis, expressing his gratitude for "the support of Serbia and other friends in the Balkans to closing the Balkans refugee route."

While in Belgrade, the Austrian foreign minister was also received by Serbia's First Deputy Prime Minister and FM Ivica Dacic.

Bilateral relations between the two countries are at a high level, stable and comprehensive, and they are characterized by intensive political dialogue, they said.

Dacic "expressed gratitude to Kurz for the personal engagement following his request to accelerate the procedure in Austria related to the recognition of driving licenses from Serbia, so our citizens in Austria no longer have to repeat driving tests in Austria," the government said.

Kurtz "conveyed gratitude to Dacic for the efforts undertaken by Serbia in meeting the challenges of the migrant crisis, stating that this issue is one of the priorities of the Austrian presidency of the OSCE."

He stressed that Austria supports further opening of chapters in the negotiations on Serbia's membership in the EU, given that it is important to keep the momentum in this process both in terms of opening and closing chapters.

The officials also discussed the situation in the region, as well as cooperation in the framework of the Berlin Process and the OSCE.