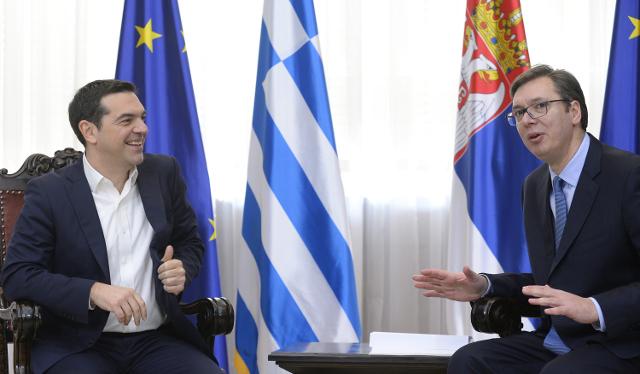 Greek PM Alexis Tsipras said in Belgrade on Tuesday that the two nations are connected by tradition, history, culture, and spirutual ties, and that Greece will be "stable" in its position regarding Kosovo.

Greece is one of five EU member-states that have not recognized the unilateral declaration of Kosovo's independence made in 2008, and rejected by Serbia as a violation of its territorial integrity.

"The future of the Balkans can only be built on the foundations of international law, not interventions, violations of the rules. There is no longer room for such things in the Balkans," Tsipras said.

During his joint news conference with Serbian counterpart Aleksandar Vucic, the head of the Greek government said their meeting earlier in the day was constructive, while both stressed the importance of mutual respect.

"I stressed that peace and stability are created through solutions mutually acceptable to all sides, Greece will remain stable in its stance linked to the respect of the principle in solving this issue," said Tsipras.

He added that Athens will continue to provide "active and stable" support to Serbia on its path toward joining the EU, and will insist on improving bilateral diplomatic relations, established 150 years ago.

Speaking about Serbia's EU bid, Tsipras said, "We recognize there are great difficulties and a great sacrifice that the Serb people must suffer to accomplish that goal, and we will help you in that."

The Greek prime minister also said an agreement was reached to "strengthen the dialogue on the refugee crisis."

Addressing the news conference, Aleksandar Vucic said that the discussion today was "long and serious" and that the friendship between the two nations was emphasized during the meeting.

"Our conversation was not based on what is past, but what we must do in the future," said Vucic.

The prime minister said Serbia supports Greece's participation in the Berlin Process, and is grateful to Greece for not recognizing Kosovo.

"We spoke about relations, and the importance of maintaining the traditionally good ties with China, Russia, and other countries," said Vucic.

Speaking earlier during the meeting between the two delegations, Vucic said that trade volume between Serbia and Greece currently stands at about 380 million euros and could grow 70-80 million a year over the next five years.

According to him, the level of bilateral trade was not satisfactory, but that it could rise significantly over the next few years.

Alexis Tsipras arrived here on a two-day official visit early on Tuesday, where he was welcomed by Aleksandar Vucic - first at the airport, and later formally in front of the Palace of Serbia.

In the afternoon, Tsipras and Vucic will attend a business forum, organized by the Serbian Chamber of Commerce at the Metropol Hotel, which is expected to bring together more than 70 Greek companies , Beta reported earlier.

While in Belgrade, Tsipras will also be received by Serbian President Tomislav Nikolic.

His trip to Serbia is the of a Greek prime minister in seven years, although Tsipras visited the country in December 2014 in his role of the Syriza party leader.

Speaking about the visit on Monday, Serbian Foreign Minister Ivica Dacic said he had "great expectations from it - primarily in terms of strengthening the relations between the two countries and their traditional friendship."

"We also attach great significance to the visit because it is important for stability and peace in the region," Dacic said, according to Tanjug.

Serbia has a key role in the wider Balkan region and, primarily for the sake of regional stability and development, it would be desirable for it to become a full member of the European family, Alexis Tsipras has said ahead of Tuesday's visit to Belgrade.

Greece will continue to actively support Serbia on its path of EU accession in the belief it will be a mutually beneficial move, Tsipras said in an interview to Politika.

He pointed out that if the EU cannot create a concrete strategy for the Balkans, the Eastern Mediterranean and the wider region - "it cannot find a solution for itself, either."

During the interview for Politika, Tsipras announced he would discuss with the Serbian leadership "many important issues, one of which is to further strengthen bilateral economic cooperation."

"We intend to strengthen our cooperation in the sphere of transport, the overall infrastructure. We want to put special emphasis on the railway connection between Piraeus and Belgrade which we predict will be implemented in the context of China's One Belt, One Road plan," said Tsipras.

He added that cooperation in the field of culture and tourism would continue, and stressed the particular importance of the joint intention of both countries to cooperate intensively in the field of security.

"Considering the common challenges we face, our political dialogue in this sphere is precious. We need to improve it even more observing also the fact that we have been connected with our Contract on Alliance for 150 years already," said Tsipras.

He believes that friendship and solidarity between the Greek and the Serbian people represent a historical constant, but notes that this is "not enough."

"It is essential to modernize and adapt our cooperation to the present time, give it a new dynamic in the context of the complex and ever-changing circumstances in the Balkan, European and international environments," the head of the Greek government told the newspaper.