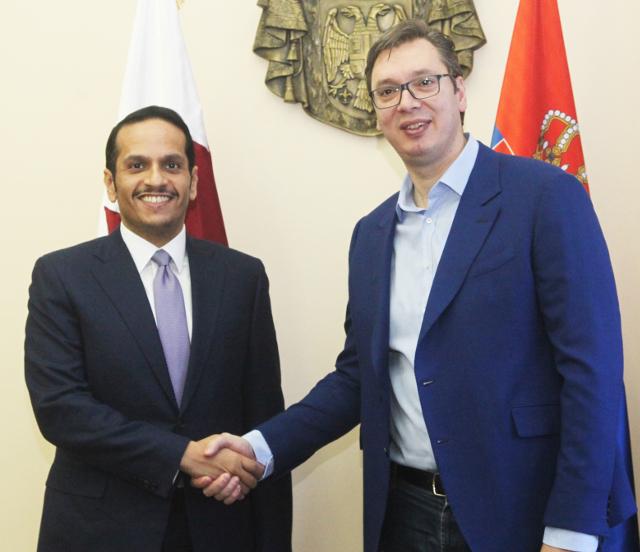 Al Thani, left is seen with Aleksandar Vucic in Belgrade on Monday (Tanjug)

According to a Serbian government statement quoted by Tanjug, they "agreed that both countries had an interest in establishing a partnership and developing their cooperation."

Vucic and Al Thani "expressed the expectation that economic ties will be improved through boosting trade and Qatari investments in Serbia."

A new visit of a delegation of the Qatari Investment Fund was announced, as well as establishing ties between chambers of commerce of Serbia and Qatar.

Vucic "underlined that Serbia can offer a lot to investors from Qatar – its economy is in a much better condition than before, and at the same time Serbia is firmly committed to preserving political stability in the region. "

He voiced hope that trust and understanding between the two countries will be built through exchange of high-level visits, and that a larger number of tourists will help the two peoples to get to know each other better.

Serbian President Tomislav Nikolic on Monday also received the Qatari minister, who said his country was interested in cooperating with Serbia in many areas.

"In a friendly and cordial conversation, Nikolic expressed the hope Al Thani's visit would be used in the best possible way to present all the advantages of investing in the Serbian economy," Tanjug has reported.

While in Belgrade, Al Thani also met with his Serbian counterpart Ivica Dacic.

During a joint news conference, the two ministers spoke about the recently introduced U.S. ban on immigration from seven predominantly Muslim countries, that does not affect Qatar.