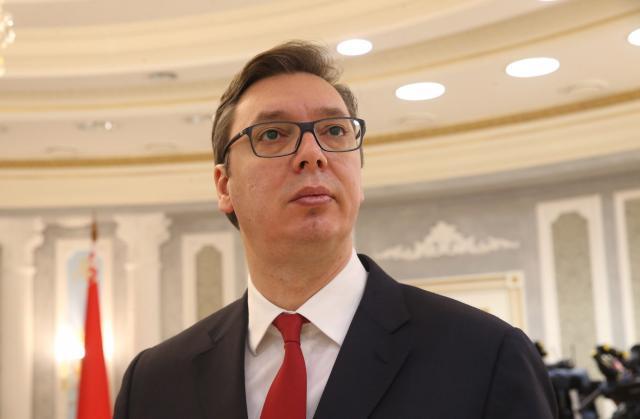 Vucic, who first addressed this topic on Thursday, added that he will be able to reveal more details in early April.

"People in Serbia need to know that Serbia is no superpower, but that anyone who might think about attacking Serbia will find it much more difficult to do so than in the past. That is the result of our agreements and I will be able to speak about all the details in a month or two, in early April," Vucic told reporters after his meeting with Lukashenko.

"We live in a world rife with changes, a world where we must make sure we are capable of ensuring stability and security for our citizens, and that's what matters to us," he said.

Vucic also "underlined we will not attack anyone and do not want anything that belongs to others - but must always be prepared to defend our territory and our people," Tanjug reported.

He added that "many questions have been opened" in Minsk, and that working groups would continue to talk, with "certain solutions" to be found soon, while "some things have already been agreed on."

Vucic said he and Lukashenko spoke about "defense industry, our possibilities when it comes to automatic and sniper rifles, and where Belarusians can participate with electronics, where they are better than we are, and about joint exports to third markets."

The prime minister said he expects Lukashenko to soon visit Serbia - "officially or unofficially, he could have his vacation in Serbia" - and stressed in his conversation with reporters that the Belarus leader "understands excellently the position and the policy of our country - an independent country that is on a European (EU membership) path and doesn't want to join NATO."

"We are grateful for it and our cooperation will be ever closer," Vucic said, revealing at the same time that the meeting in Minsk "lasted twice as long as planned, and was sincerely friendly."

Earlier in the day, reports said that Vucic and Lukashenko discussed "bilateral relations," with Vucic remarking that "political and economic relations between the two countries are progressing."

Belarus will continue to support Serbia, Lukashenko said on Friday, urging a strengthening of trade between the two countries.

“We have always supported you even in the most difficult times, and will always support you. We did it although sometimes it was not beneficial for us. We had a principled position, including on the unity of your state. Therefore, you can count on Belarus. You should know that we will do everything we can for Serbia,” Lukashenko said.

The meeting came on Friday, the second day of his official visit. Yesterday, Vucic spoke with his counterpart Andrei Kobyakov, who stressed Serbia was a key economic partner in the Balkans.

Vucic also revealed that he and his hosts discussed a potential acquisition of weapons, "above all to protect our sky."

The Serbian delegation includes ministers of defense and economy, and mayors of Smederevo, Valjevo, and Sremska Mitrovica, whose cities signed twinning agreements with three Belarus cities.

Vucic also met with Chairman of the Council of the Republic National Assembly of Belarus Mikhail Myasnikovich, who suggested new forms of cooperation and joint sessions of the bodies of the two assemblies.

The prime minister laid a wreath at the Monument to Victory in Minsk, and visited the All Saints Temple and the Belarus State Museum of the Great Patriotic War History.