Kosovo President Hashim Thaci has said that Serbia was "arming Serbs in the north, as part of a plan to partition Kosovo." 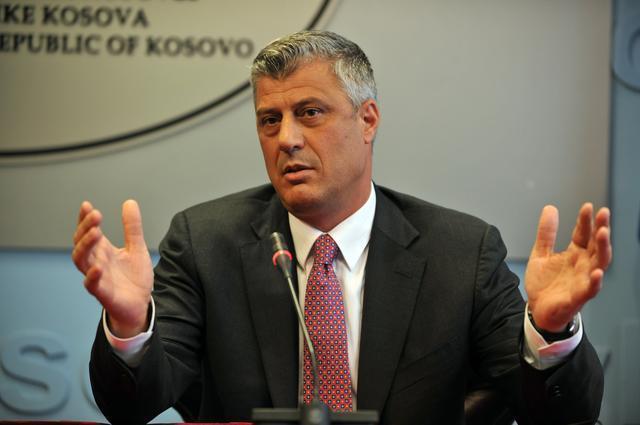 Thaci spoke for German broadcaster Deutsche Welle when he made this claim, Beta reported on Wednesday.

He added that Kosovo's institutions had information that what was referred to as "the Russian train" - a Russian-manufactured Serbian Railways train on the Belgrade-Kosovska Mitrovica line that was prevented from reaching its destination earlier this month - transported "arms and members of paramilitary formations whose goal was to enter Kosovo and destabilize it."

"At the same time, we know of a Serb plan to partition Kosovo and we also know that Serbia is arming Serbs in northern Kosovo," said Thaci.

As proof for this claims, Thaci said there was "evidence that Serbia is using the model used by Russia in Ukraine."

"They are sending civilians but also people in uniforms to the north, and are arming Serbs with firearms and other weapons, so they can be ready to defend themselves from alleged Albanian attacks," he said.

Thaci then called on Kosovo Serbs "not to fall under the influence" and also "not to become the victims of Belgrade's nationalist policy which caused great pain to the Serbs in the past."

"Instead of calls for war from Serbia, I'm calling the Kosovo Serbs to peace and dialogue. Instead of ethnic and territorial partition I call on them to join NATO and the EU," Thaci told Deutsche Welle.

Speaking on Tuesday in Brussels, where he was taking part in a new round of the EU-sponsored Kosovo talks, Serbian President Tomislav Nikolic dismissed the claims that Serbs in northern Kosovo were being armed - previously presented in some Albanian language media - and called them "nonsensical."

"That is absolutely not correct, because that's impossible to do in a territory that is completely under control of EULEX, UNMIK, KFOR, and a police where Albanians are represented. That's impossible also because all crossings are under full control," said Nikolic.

He added that he "doesn't know why Albanians came up with this story - unless it's to find excuses for attacking that territory."

"I don't recommend to them to endanger peace and security anywhere in Kosovo and Metohija, especially not in the north," Nikolic said.