Serbian Foreign Minister Ivica Dacic says he is "on good terms with representatives of all countries - especially after (their) visits to Serbia." 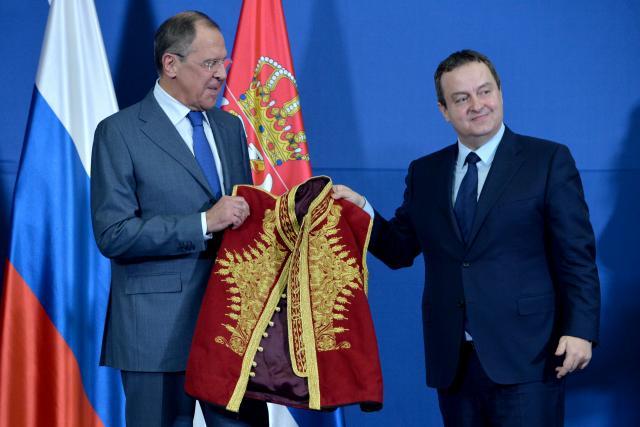 But, he added, his dearest guest in Belgrade is Russia's Foreign Minister Sergei Lavrov, "the first I call when Serbia has a problem."

"It's never happened yet that when we phone (U.S. Secretary of State John) Kerry, we know we've solved the problem, whereas when we call Lavrov it doesn't mean we've solved the problem, but we know that Russia is on our side, and when it comes to the UN, a decision cannot be made to the detriment of Serbia. That's already happened a few times - on the occasion of the (draft British) resolution on Srebrenica, Kosovo's membership bids in various international organizations, and that is a relationship of friendship," Dacic told the Belgrade-based broadcaster TV Pink.

Commenting on Serbia's recent decision to vote against a resolution on Crimea tabled at the UN General Assembly by Ukraine, Dacic said his country cannot vote against Russia's interests and at the same time expect Moscow's support in "contentious situations."

"Russia voted against Kosovo's membership in UNESCO, while Ukraine didn't even attend the meeting, even though they didn't recognize Kosovo. Why? Because Ukraine is doing the same thing Serbia is doing - that which reflects the interests of those who support them," said the minister.

Dacic said he was on good terms will all statespeople he has met with, and that he owns "a collection" of 100 phone numbers belonging to his colleagues from various countries around the world.

"I'm lucky that way, and it's also my nature to remain on good terms with everyone I meet, and lately I've met with Lavrov, the Chinese foreign minister, the head of Great Britain's diplomacy, Boris Johnson, who is a great friend of ours, U.S. State Secretary John Kerry, whom we can always contact," he said.

Dacic described his country as enjoying the best reputation in the region "as the biggest country that as achieved the greatest results."

"The huge number of meetings at the highest level speaks to that," he remarked.

Serbia, according to its foreign minister, "must understand the processes that took place in the world lately - such as Brexit, the victories of right-wing parties, Donald Trump's victory in U.S. presidential elections, which heralds that country's new position on the world stage."

"Trump's victory means that Serbia will fare better than during Obama's or Clinton's administration, because Trump is announcing a different approach of the United States to world crises, and thinks he should not meddle in all of them and act like a global policeman, imposing his concepts, and he often mentions as examples of this the Balkans and the bombing (of Serbia)," said Dacic.

However, he added, one should not expect the changes mentioned by the media - like, for instance, that Trump will "return Kosovo to Serbia."