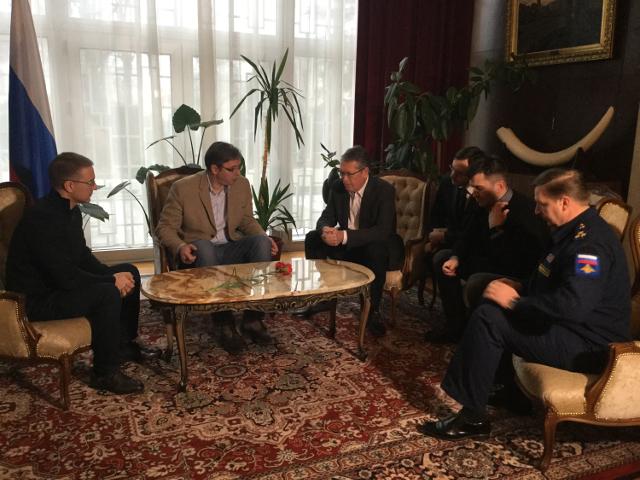 Stefanovic, Vucic, and Djordjevic are seen with Chepurin and other Russian embassy staff (Tanjug)

The message was sent to President Vladimir Putin, Prime Minister Dmitry Medvedev, and the Russian people.

"We are very shocked about the tragedy over the Black Sea where, prominent artists of the Alexandrov Ensemble, the Russian military choir, and other passengers on the plane of the Russian Ministry of Defense lost their lives in just a moment. It is hard to find words of comfort for such a big loss for the Russian art," Vucic said, according to the government's website.

He added that "the memory of their noble wish to bring the joy of music to soldiers who spend New Year holidays away from their families will remain."

"Belgrade and Serbia have several times had the opportunity to enjoy their voices and musical virtuosity, and our sorrow is thus even greater. On behalf of the government of the Republic of Serbia and on my own, I wish to extend deepest condolences to the families and friends of those killed, as well as the state and military leadership of the Russian Federation," Vucic's message said, adding:

"If Serbia, as a small country, can in any way help in these difficult times, we are here to help."

Vucic and Defense Minister Zoran Djodrjevic, along with Interior Minister and Deputy PM Nebojsa Stefanovic, also visited the Russian embassy in Belgrade late on Sunday to offer their condolences to Ambassador Aleksandr Chepurin.

It was reported on Monday that Russian officials have ruled out the possibility that the plane, whose 92 passengers and crew included 64 members of the Alexandrov Ensemble, crashed as a result of a terrorist act. Transport Minister Maksim Sokolov said the Tu-154, en route to Syria, fell either due to technical or pilot error.