Russian Foreign Minister Sergei Lavrov said in Belgrade on Monday that his country "will not interfere in Serbia's internal issues." 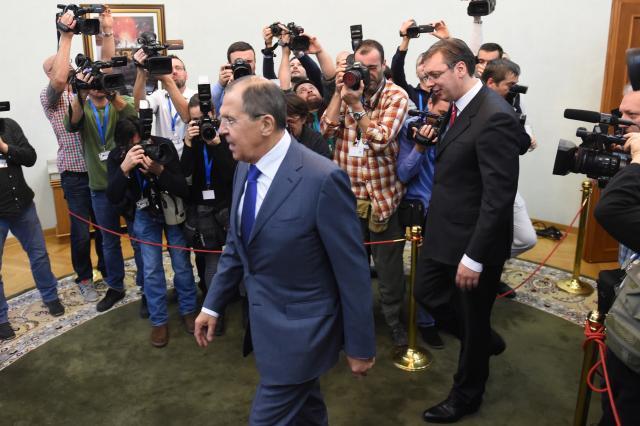 Serbian Prime Minister Aleksandar Vucic spoke Russian when he welcomed Lavrov at the Serbian government HQ, and noted that cooperation between the two nations and countries has always been good, adding he was convinced it would be "increasingly more successful" in the future.

Lavrov noted that he visited Serbia on several occasions in the past, and was "especially glad every time he was in the beautiful Belgrade."

The Russian official "conveyed greetings to Prime Minister Vucic from President of the Russian Federation Vladimir Putin and Prime Minister Dmitry Medvedev, particularly appreciating the personal efforts of the Serbian prime minister for cooperation with Russia, as well as positive trends in economic ties in order to further economic growth and development of the two countries," the Serbian government said in a statement after the meeting.

Lavrov said that his country "followed with particular attention last spring's elections in Serbia when Vucic won," believing it to be a factor contributing to further development of relations between the two countries.

"Russia will not interfere in the internal affairs of Serbia. We are always ready to find a balance in our interests," said.

Vucic and Lavrov "discussed the cooperation between the two countries and further development of relations based on strategic partnership and the interest of the two countries for its deepening in all directions," the government said.

Vucic "stressed that one of the focuses of cooperation between Serbia and the Russian Federation should be economic cooperation, taking into account the benefits provided by the Free Trade Agreement," and that Serbia is "ready to promote cooperation in the fields of energy, agriculture and telecommunications, and added that Russian investments in all these areas are welcome."

The prime minister also "informed Lavrov about the economic progress of Serbia, and expressed interest in Serbia’s expansion of the capacity of gas storage in Banatski Dvor, as well as for exporting Fiat vehicles to the Russian market, but also the market of the Eurasian Union."

Vucic "expressed his gratitude for the donation of the Russian Federation for interior painting of St. Sava Temple in Belgrade and the mosaics on the dome of the temple."

Vucic and Lavrov further discussed "the development of cooperation in the field of defence, which will be the topic of the next meeting of Prime Minister Vucic with Russian Defense Minister Sergei Shoigu in Moscow."

"The upcoming visit of Prime Minister of the Russian Federation Dmitry Medvedev to Serbia" was also one of the topics of today's meeting, the Serbian government concluded.

The Russian Ministry of Foreign Affairs announced on Saturday that while in Belgrade, Lavrov and his hosts would conduct "a deep analysis" of key bilateral and international issues, and consider concrete steps toward further development of cooperation.

According to the announcement from Moscow, Kosovo and Medvedev's visit are also on the agenda.

Sergei Lavrov will also attend a meeting of the Ministerial Council of the Organization of the Black Sea Economic Cooperation (BSEC) on Tuesday.

Lavrov was welcomed at Belgrade's Nikola Tesla Airport by Serbian Deputy PM and FM Ivica Dacic and received by PM Aleksandar Vucic in the Serbian government building, with a meeting with President Tomislav Nikolic following afterwards.

Lavrov and Minister of Labor, Employment and Veteran and Social Affairs Aleksandar Vulin will then lay wreaths at the Cemetery of the Liberators of Belgrade.

Lavrov will meet with Dacic in the afternoon, with the two ministers also scheduled to speak to reporters.

According to announcements ahead of the visit, Lavrov is primarily expected to address bilateral issues, as well as exchange views on regional issues and the global situation.

Ahead of Lavrov's arrival, Aleksandar Vucic said he expected their meeting to be "serious and open," noting that it will cover political, economic, military-economic cooperation.

Responding to reporters' questions, Vucic said another topic "should be" the Petrohemija company and the payment of outstanding debts.

Also ahead of the visit, Ivica Dacic said Lavrov's arrival was "of exceptional political significance," adding that he expected it would represent "a step further in developing relations between the two countries."

Dacic told reporters there were "no open issues" between Serbia and Russia, and that Russia "assigns great importance to its relationship with Serbia, that is very good and characterized by a high level of mutual trust, friendship, and support, when it comes to the most important issues on the international political scene."

Russian Ambassador Aleksandr Chepurin said the visit is "regular and planned to focus on three basic topics - consideration of the global situation, regional issues, and bilateral relations," and that it was planned to coincide with the BSEC gathering.