Milorad Dodik says his relationship with the Serbian prime minister is "good - we continue to work in the best interest of the RS and Serbia." 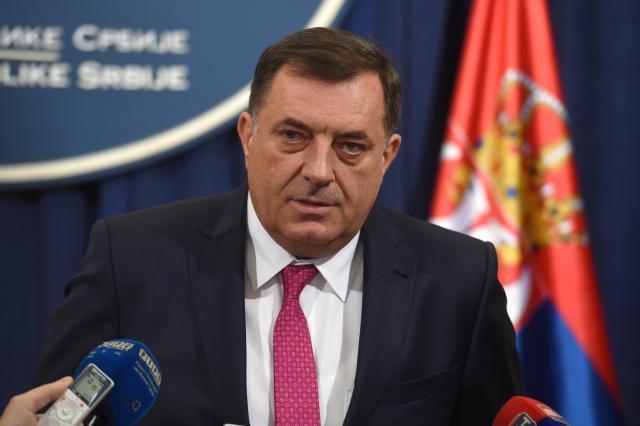 The president of the Serb entity in Bosnia-Herzegovina (RS) made these comments at the Serbian government's HQ in Belgrade on Thursday, after a meeting with Aleksandar Vucic.

When reporters asked about his relationship with Vucic "considering there was talk about a chill after the RS referendum," Dodik termed this as "speculation."

"Neither yourselves, nor many others thinking about it need worry. And it's more that those who talk about it publicly want it to happen, than it being true," he said.

Dodik noted that his meeting with Vucic today was not their first in the wake of the September RD Day referendum, that they have already met in Belgrade once since, and that they speak on the phone "almost every day."

"Serbia should give its trust to this government and continue with the project of long-term stabilization. I think Serbia is on the right path," Dodik also said.

When reporters asked whether the meeting touched on the Serbian presidential elections, to be held next spring, and considering that he "does not hide his support for current President Tomislav Nikolic" - the RS leader said that would support the candidate of the SNS - Serbia's ruling party led by Vucic.

He also stressed that the presidential elections in this country are "Serbia's affair."

"This government brought a new momentum and a new dimension, while the fact some in Serbia don't see it that way... Serbia has regained and strengthened its international position and stabilized its public finances," said the RS president, stressing that "one can see this even from Banja Luka" - and that the current government in Serbia "has the full support" of the Serb entity.

"The RS will always be on the side of whomever citizens of Serbia elect, while I have a right to express my own opinion," Dodik said, concluding that the RS enjoys "best possible" relations with Serbia.

Milorad Dodik saidon Thursday he and PM Aleksandar Vucic discussed implementation of joint infrastructure projects and construction of a highway " to better connect Serbia with the RS."

"The highway would go from Serbia across the border at Raca or some other place toward Bijeljina and then on toward Brcko," he told reporters after a meeting with Vucic.

The regular meeting and consultations mostly dealt with infrastructure projects, and everything is proceeding in the best way possible, he said.

"We see Serbia as our mother country, which we want to be good and strong, we want a rise of Serbia's power in all segments as that also makes our position better. Serbia's policy has always been one of respect of the Dayton Peace Accord, but it never went outside the national interests of the RS," he said.