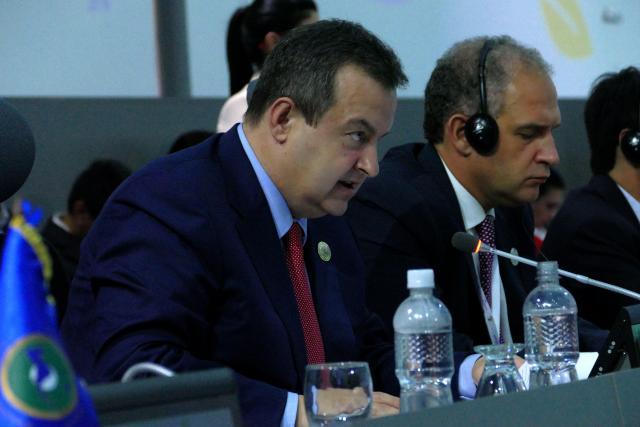 He did so on Tuesday during a meeting of the Visegrad Group, the Western Balkans Six, and their neighbors, held in Warsaw, Poland.

According to a Beta agency report, Dacic said that while "(our) interests sometimes do not coincide" the EU must respect its own decisions, and the status neutrality of Kosovo during meetings.

"Are the representatives of Pristina marked with an asterisk and a footnote in meetings? Do you respect the status neutrality? You talk about them as if they are a country, and we do not agree with that. Has the SAA with Kosovo been ratified in the national parliaments of (EU) member-states? No, it has only been ratified in the European Parliament. How can you talk about Kosovo as a state?" Dacic asked, as he addressed his fellow ministers, and EU High Representative for Foreign and Security Policy Federica Mogherini.

Dacic then asked "should Serbia accept the independence of Kosovo, when not even all EU members have done that."

"We are tolerant, but you in the EU must adhere to your own decision," the minister said, adding that Serbia is being asked to join EU decisions on foreign policy matters that are not in line with the country's national interests.

Dacic pointed out that in the European integration process, Serbia must deal not only with comprehensive reforms, but also with the dialogue on normalization of relations with Pristina, the outcome of which will affect the whole region.

He added that European integration is also threatened by "the policy of conditioning" where a ladder that should stay put is increasingly becoming a moving target that changes its size and shape, and reduces the confidence in the final result - achieving membership in the EU.

"Because of all this, our citizens are legitimately asking whether there is indeed a genuine intention for Serbia and the rest of the region to become members of the European family, or if the endless conditioning and delays in opening some chapters are merely a smokescreen behind which hides the unwillingness, if not the open opposition of a majority of member-states toward a further expansion of the Union," Dacic said.

The Serbian foreign minister also remarked that EU integration is not helped by the Western Balkans being asked to show "strategic patience."

"We need to know what the EU expects and wants from us. To require strategic patience from a region that has not managed to move closer to the EU in a significant way for more than a decade will not contribute to intensified reforms and strengthening of stability. We need EU's strategic support in every respect," said Dacic.

He also asked for support for Serbia - "which moved forward in the reform of the whole society but has the impression that European integration is not progressing as envisaged, because it is largely conditioned by the progress in the dialogue between Belgrade and Pristina" - to open three more chapters in its EU accession talks in December, "to give momentum to the European perspective."

Dacic also remarked that if the EU goes ahead and introduces registration fees for Serbian citizens traveling to the EU - the so-called ETIAS system meant to strengthen security checks on visa-free travelers - Serbia should consider adopting "reciprocal measures."

"And I will make that proposal. How is it possible for such a step to be made unilaterally?," the Serbian minister asked.