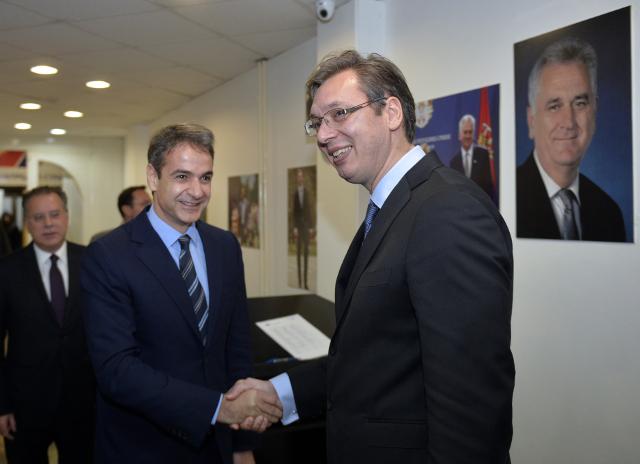 During the meeting in Belgrade on Tuesday, Mitsotakis "congratulated Vucic on the country's economic progress and fiscal consolidation," and also, "on always telling citizens the truth," Tanjug is reporting.

"Nowadays the easiest thing is to tell the people what they want to hear," the Greek politician said, noting that Vucic has undertaken "difficult measures and made difficult decisions, that will bring betterment in the long term to all citizens."

Speaking during a joint news conference at the SNS HQ, Mitsotakis also described Serbia as "the pillar of stability in the region."

He stressed the importance of increased economic and every other form of cooperation between Serbia and Greece, the arrival of Greek investors to Serbia, and vice versa, and development of tourism, which should go both ways.

Mitsotakis voiced his satisfaction with the EPP's decision to accept the Progressives (SNS) as an associate member, and stressed that New Democracy would continue to support the party in the future.

Mitsotakis also stressed that he would support every effort Serbia makes on its path toward EU membership.

While in Belgrade, the New Democracy leader was also received by President Tomislav Nikolic and by Foreign Minister Ivica Dacic.

Thanking Mitsotakis for visiting Serbia and supporting the SNS membership in the European People's Party (EPP), Vucic said he wanted even better relations with the Greek party.

They are friends supporting Serbia's European path and territorial integrity, he told the joint press conference.

"We discussed ways of improving Serbia-Greece relations and the need to strengthen our economic ties as we are convinced that the 400 mln euro trade volume should reach one billion", Vucic said.

This year we have had 2.8-2.9 percent growth, while Greece had planned a 3 pct growth rate but it will be around zero, but we wish them higher growth, Vucic said.

Serbia is hoping for 3.5 percent growth in 2017, and four percent would be an exceptional result, he said.