Ruling in minister's lawsuit against weekly by end of year

A hearing was held at the Higher Court in Belgrade on Tuesday in the case of Nebojsa Stefanovic's lawsuit against a Belgrade-based weekly. 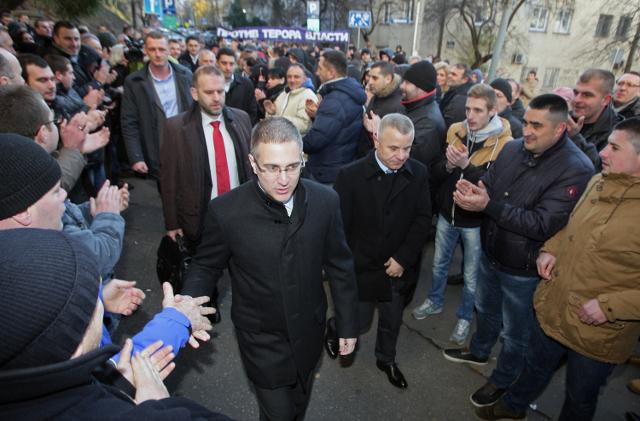 Stefanovic arrives at the court (Tanjug)

The Serbian interior minister, who is also a high-ranking official of the ruling SNS party, has sued the weekly NIN, its editor-in-chief, Milan Culibrk, and Sandra Petrusic, one of its reporters, over an article published earlier this year.

The Beta news agency is reporting that this hearing completed the trial, and that the ruling will be announced by the end of the year.

Stefanovic told the court today that his professional reputation and honor were damaged by the weekly's writings, while Petrusic and Culibrk said the article never claimed that Stefanovic demolished the buildings in Hercegovacka St. - but instead spoke about his political responsibility "as the personification of the first man of the police."

Stefanovic arrived at the court earlier this morning cheered on by a group of citizens who gathered there to support him, with Belgrade City Manager Goran Vesic among them, Tanjug reported.

Another group came to protest, holding a banner "Against the terror of the government," and reacting to Stefanovic's arrival with disapproval.

The weekly NIN on June 16 this year published an article on its front page under the headline, "Nebojsa Stefanovic, the main phantom from Savamala."

The article concerned the role of the minister in the tearing town of three buildings in Belgrade's Hercegovacka Street, in the Savamala district, in late April.

"The demolition in Savamala involved several different structures: state, non-state, and several levels of government, vertically. Hence the responsibility of top city officials is indisputable. It's just that it isn't sufficient. Because a job like this would not have been possible without the knowledge and the help of the police minister," the article said.