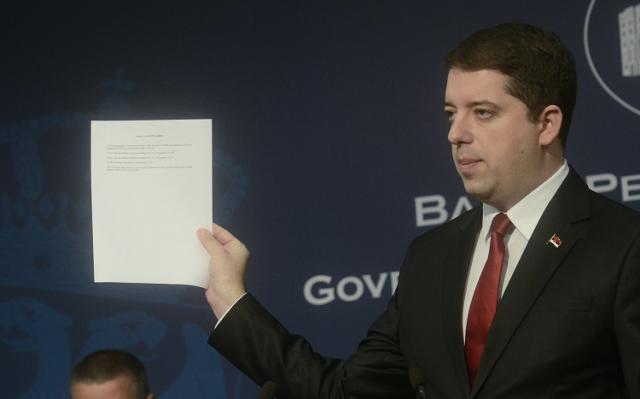 Djuric is seen during the news conference on Monday (Tanjug)

According to the official, who spoke during a news conference in Belgrade on Monday, this is particularly true concerning "the fact that Telekom Srbija will officially operate in Kosovo as a company legally recognized by the international community and the Pristina institutions."

"Telekom Srbija and the Republic of Serbia remain the sole members of the International Telecommunications Union, while this dialing code is disposed of by Serbia," he added.

According to Djuric, the news conference today was called "to provide accurate and full information on the conclusions on implementation of a 2013 agreement."

And these conclusions, Djuric added, should normalize the work of telecommunications companies in our southern province.

EU Commissioner Johannes Hahn has welcomed the agreement on telecommunications reached in the Kosovo talks in Brussels.

Hahn, who is is charge of EU's Neighborhood Policy and Enlargement Negotiations, referred to "dialogue (between) Kosovo and Serbia" in two messages posted on Twitter, that combined read as follows:

"Welcome arrangement reached 2day by both parties on further implementation of Telecommunications Agreement; Hope this progress will help 2 accelerate the outstanding agreements, in part. on Assoc./Community of Serb majority municipalities+Energy."

Serbia's state broadcaster RTS said that based on the deal, the property of Serbia's Telekom Srbija telecommunications company in Kosovo will be transferred to Telekom's daughter company MTS d.o.o.

According to Tahiri, this was "the result of intensive talks between Kosovo and Serbia representatives brokered by the EU."

The International Telecommunication Union will award Kosovo the 383 dial code on December 15, while all international dial codes used by stationary and mobile providers in Kosovo 381, 377, 386, will be discontinued, Beta agency has reported.

The report also quotes Director of the Serbian Government's Office for Kosovo and Metohija Marko Djuric as saying earlier that Belgrade and Pristina "might be able to reach an agreement on telecommunications in Kosovo, which includes the unhindered operations of Telekom Srbija in Kosovo."

Djuric also told TV Pink"explained it was actually a telecommunications agreement made in 2013, and reconfirmed in 2015."

The EU announced in a statement posted on its External Action Service website that on November 13, "representatives of both parties under the EU facilitation reached an arrangement on further implementation of the agreed and signed Telecommunications Agreement from 2013 and the 2015 Action Plan stemming from this Agreement."

The agreements will ensure that a three-digit dialing code is allocated by the International Telecommunications Union to Kosovo, and enables the newly-established subsidiary company Mts d.o.o to operate fully-licensed fixed telephone services in Kosovo and to obtain a temporary authorization for mobile telephony. Kosovo will be allocated a three digit dialing code by ITU, at the same time that the new company will become operational, the EU said, adding:

"The parties agreed on the mobile telephony and frequency bands and spectrums to be allocated to Mts d.o.o in Kosovo, enabling it to continue to provide the current level of coverage to its customers. The arrangement also enables the transfer of assets to Mts d.o.o without any customs, taxes or charges.

The parties agreed on a migration period of two years during which a dual numbering approach will be used, in order to allow customers of the new company to continue using their existing number in Kosovo in which the company operates.

In the coming weeks, both parties will implement a series of measures under the EU's facilitation to execute this arrangement. All draft documents linked to the licenses, the transfer and registration of assets will be completed by 28 November.

The parties will then review these documents and, if they agree that the documents are in accordance with the Telecommunications Agreement from 2013, the 2015 Action Plan and the Conclusions of the EU facilitator, Serbia will send a letter to the ITU on 3 December agreeing that a three-digit code can be allocated to Kosovo.

The EU welcomes this outcome and urges both sides to accelerate progress on all other outstanding Agreements implementation work, in particular the Association/Community of Serb majority municipalities and on Energy."