Romania recognizes Serbia's progress on the path toward the EU and it will continue to support that process. 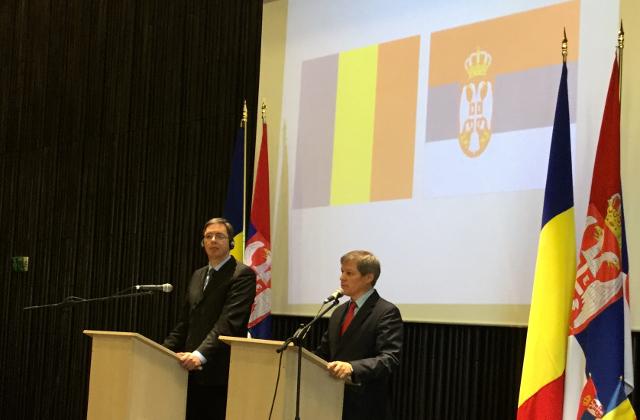 Vucic and Ciolos are seen in Timisoara (Tanjug)

Romanian PM Dacian Ciolos said this on Thursday, noting that his country's position on Kosovo was unchanged.

In an interview to Tanjug ahead of Thursday's meeting with Serbian PM Aleksandar Vucic in Timisoara, Ciolos said that, from the very beginning of Serbia's EU integration process, Romania had been one of the strongest and most vocal supporters of Serbia's European prospects.

"We hope that new negotiation chapters will be opened soon - we recognize that Serbia is making progress on its path toward European integration through adopting and implementing reforms," he said.

Romania's position on non-recognition of Kosovo's unilaterally declared independence remains unchanged, he said, urging a continuation of high-level meetings between Belgrade and Pristina.

Serbian PM Aleksandar Vucic met with his Romanian counterpart Dacian Ciolos in Timisoara on Thursday to discuss bilateral cooperation, strengthening of trade, Serbia's European path, the migrant crisis and the situation in the region.

The two PMs attended the signing of a protocol on the establishing and the activities of joint patrols along the common border, a joint statement on Romania's support for Serbia in the EU integration process and a declaration on cross-border cooperation in employment and social affairs.

Vucic was also scheduled to visit the headquarters of the association of Romania's ethnic Serbs and the Serbian Orthodox church in Timisoara later in the day.