Interior Minister Nebojsa Stefanovic says a member of the UKP that has been arrested "cooperated with a Western intelligence service for a while." 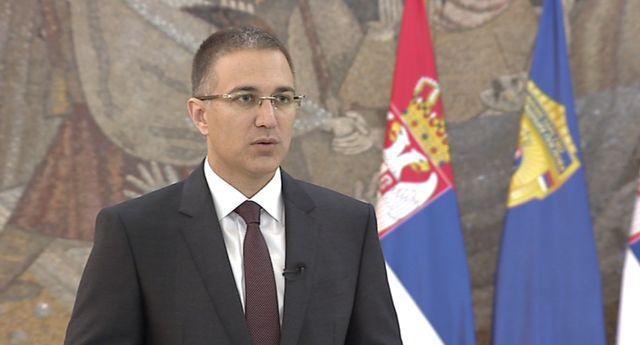 The UKP is the acronym in Serbian for the Criminal Police Directorate of the Serbian Interior Ministry (MUP).

Speaking on Tuesday, Stefanovic announced that he "cannot reveal the name of the person in custody or give more details about the investigation," but said that the passing of information to foreign intelligence officers "was not take place over a short period, that is, during just a few months."

"This was a good operation of the MUP and the BIA (Security Information Agency), who noticed this person and their contacts with a member of a Western intelligence service, and neutralized this person through effective action. That person is in the hands of our investigative bodies, further action depends on the prosecutor," said Stefanovic.

When asked why this activity lasted for a long time, Stefanovic said that operating procedures took a while and required special methods - "because these are not naive people and operations."

"That cannot be cut within a day or two. Whereas an operation can be carried out only when there is enough concrete evidence," said Stefanovic.

Serbian Prime Minister Aleksandar Vucic said on late on Monday, after a meeting of the Bureau for Coordination of Security Services, that Serbia was experiencing increased activity of foreign intelligence services "both from the East and the West."

Although Vucic said that the Serbian authorities have noted several cases of activities against Serbia and "neutralized" several person engaged in them, Stefanovic today spoke only about one case.

And it is the same case about which Vucic provided some specific information a day earlier. The prime minister revealed that a senior UKP officer passed the data and that proceedings have been launched against this person.

As Vucic said, "very powerful intelligence services received everything that is being done in the Serbian criminal police on a flash drive."

Stefanovic said that this case was not related to Vucic's remark about police officers who "sit in mafia yachts," but added that "the essence is the same."

"If you are working against your country, whether by disclosing information to foreign intelligence services, be they from the East or from the West, or by hanging out with criminals and protecting them in any way, you are doing damage to your people and country. We want to send a clear signal that such behavior, not only in the security structures, but anywhere in the state structures, is inadmissible. Also, to show that our intelligence capabilities and defensive capacity are strong enough to discover and sever that kind of contact," said Stefanovic.

Speaking about the situation in the UKP, Stefanovic said this was the first time in history that the MUP put an end to such activity in this way.

"I cannot say whether something of the kind was taking place ten, seven or five years ago, but obviously the former structures were not capable of dealing with or detecting such activity. We now have a structure in the MUP that wants to protect the interests of the country and citizens of Serbia, not cheering on any foreign power, neither left nor right, neither East nor West," Stefanovic.