Serbian Prime Minister Aleksandar Vucic says "some individuals" have been detained in Belgrade in connection with the events in Montenegro. 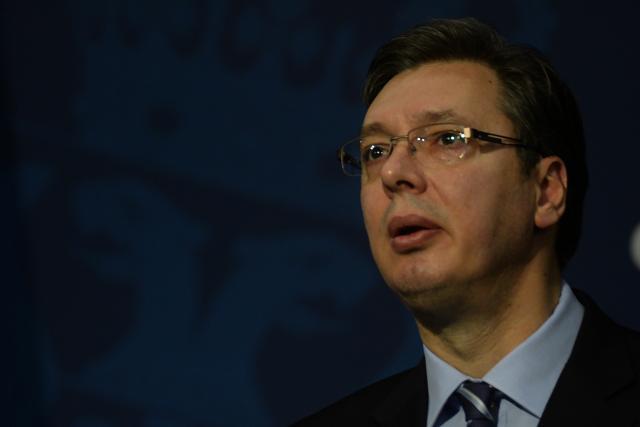 After the meeting of the Bureau for Coordination of Security Services late on Monday in Belgrade, he told reporters there was irrefutable evidence that certain persons - but not those arrested in Montenegro - monitored the movement of Montenegrin Prime Minister Milo Djukanovic on a daily basis, and informed other persons who were "supposed to act":

"Our security authorities have come up with irrefutable evidence and material evidence that a variety of illegal activities for the territory of Montenegro were being prepared in the territory of Serbia, among others, and even these persons, who have nothing to do with the Serbian state - and some of these persons have been detained in Belgrade and are under our control - were working together with people, for whom I can say there is an element of foreignness in the who case. There is irrefutable evidence that some people, and that's not those who were arrested, monitored the movement of the prime minister of Montenegro on a daily basis, every second, telling other people who were supposed to act on it."

"Money has been found as well, about 125,000 euros, uniforms and other things," said Vucic.

Vucic also said that significant activities of foreign intelligence services both from the East and the West have been recorded in Serbia, and that documents from the Criminal Investigations Police (UKP) are ending up in foreign hands.

"As far as the government of Serbia is concerned, while I am the prime minister, it will pursue a policy of an independent of Serbia. This is a country of its citizens, Serbs and members of other nations. That is how we will preserve our land," Vucic.

"Our authorities in accordance with the law have successfully recorded a number of activities against the interests of Serbia, as well as the perpetrators of these acts. We succeeded in neutralizing some of these persons with our activity and they will no longer be able to do their job in that manner," said Vucic.

According to him, Serbia will prosecute those who think that it is permissible to provide operational information to officers of foreign embassies.

Speaking about the arrest of Serbian citizens in Montenegro on election day in that country, earlier this month, he said that Serbia "carried out activities for four days" in connection with that, "but was silent about it."

He said that Montenegrin officials have been informed about the findings of the Serbian security services.

According to Vucic, some of the persons who participated in monitoring Djukanovic are still at large.

"The good news is that in all this we found no involvement of any politician from Serbia, or from Montenegro", said Vucic.

He pointed out that Djukanovic was monitored using high-end devices. Vucic then said that "anyone who thinks that Serbia will in any way participate in some crime is sorely mistaken."

"I could not agree to be silent about this, I could not be silent about the giving of operational information to foreign intelligence agencies. The price we will pay is not important to me. No small country has so far not done this. None. Only the big can do this. I'm not saying we are big, but we can be big when it comes to respecting the law, and to our behavior," said the premier.

Vucic also stated that was "all he could say" - while the state has much more information including direct admissions, photographs and recordings of everything of which he spoke.

At the beginning of the press conference, Vucic said that he was satisfied with the results in the fight against organized crime in the previous three months.

Asked to comment on the visit of Prime Minister of Kosovo Isa Mustafa to the Trepca mining basing, the prime minister responded by asking:

"And which mine did he visit?," and then continued:

"He visited the southern part of Trepca, which has been under Pristina's control since 1999. When will he visit the northern? He doesn't know, either... They love to pull some stunt every day, both he and and Edita Tahiri... "